As early as 2008, networking giant Cisco was well along in its social media evolution.  Back then you could find the company on Facebook, Twitter and YouTube.

Yet something was missing – the hard business case for social media.  Like most companies, Cisco knew it was benefiting from social media, but it couldn’t prove it.

The launch of a new router using only social media would provide the proof Cisco’s marketers were seeking.

The results surprised even the social media enthusiasts. With this single project, the company shaved six figures off its launch expenses and set a new precedent for future product launches.

“It was classified as one of the top five launches in company history,” said LaSandra Brill, senior manager, global social media. “It was the crossing the chasm point for us in the adoption phase of social media and helped us get over the hump of internal acceptance.”

Up to that point, the traditional product launch went something like this:

Cisco met its audience where they were – in online venues and the gaming world. Here’s how:

Second Life – The company built a stage with big-screen monitors, chairs for the audience and palm trees for its flagship launch event – entirely in a Second Life environment. It then piped in video of executives presenting the ASR.

Network engineers or the press could board their own “personal transport device” to surf through a virtual router.

An executive presents the new ASR in a live Second Life event. 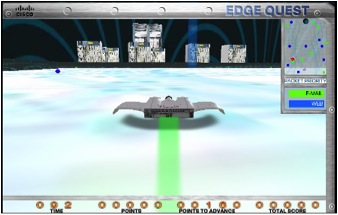 A 3D Game – More than 20,000 network engineers learned as they played a 3D game, wherein they “defended the network” using the ASR. (Research shows that 17% to 18% of IT professionals play games online every day.) Top scorers went on to a championship round with the winner bagging $10,000 plus a router.

“If they’re playing games, that’s how they want to engage and that’s who they are,” Brill said. “How do we make that applicable to what they do at work?”

YouTube – Video gets eyeballs. Cisco’s “Future of Shopping” is up to 3.3 million views.

Additionally, the company heavily used video to educate customers and the media about the ASR, encouraging them to pass along links via social sharing. 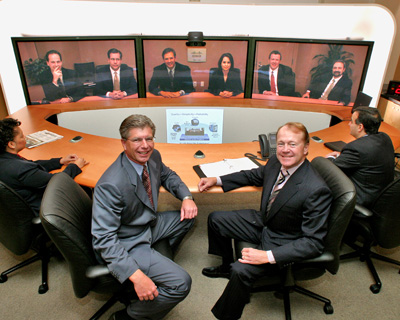 Video conferencing – The company’s next-generation video conferencing technology, Cisco TelePresence, brought customers together at local offices around the globe. Executives back in San Jose could see the audience’s facial expressions and vice versa.

Mobile – A video datasheet engaged engineers on their mobile devices.

Facebook – Hardcore network engineers could connect on the Cisco Support Group for Uber User Internet Addicts. How addicted are they? One member shared that he networked his community swimming pool so he could stay connected poolside.

“It allowed them to connect with Cisco in a new way, and build preference and customer loyalty,” Brill said. 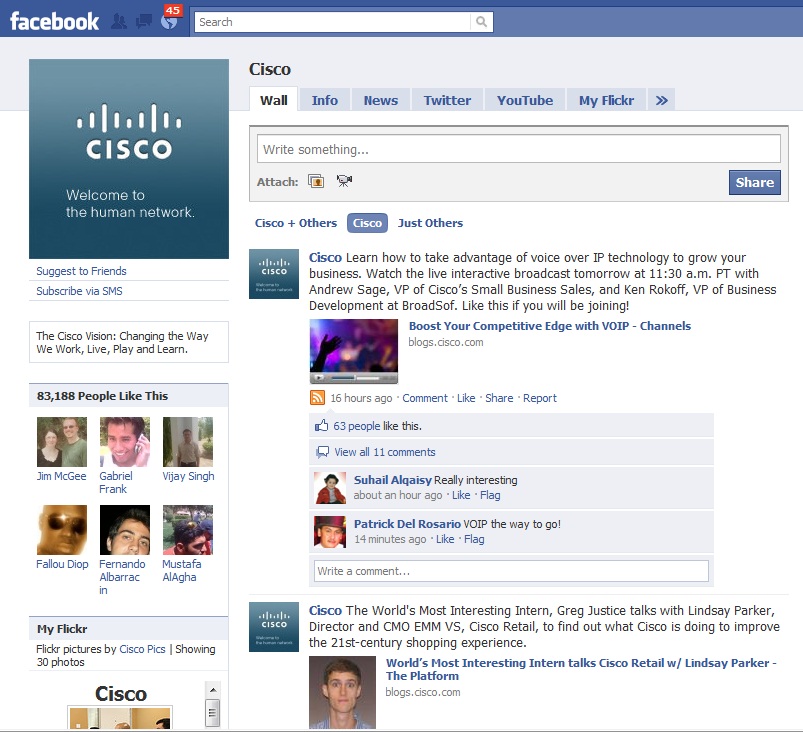 Social Media Widget – Cisco assembled videos, collateral and images in a widget format and embedded it into “social media” news releases and launch pages. Bloggers and others could spread the information easily with the embedded code.

The whole campaign spanned three months with the launch in the middle. During pre-launch, launch and post-launch, Cisco kept the audience engaged by encouraging discussion with and among its audience.

Compared to traditional launches of the past, the ASR launch delivered eye-opening numbers. More than 9,000 people (90 times more than past launches) from 128 countries attended virtual launch events. Without travel, the launch saved an estimated 42,000 gallons of gas.

Plus, top executives spent only about an hour recording the video presentation.

Print ads were largely replaced with media coverage, including nearly three times as many press articles as a comparable traditional launch, more than 1,000 blog posts and 40 million online impressions.

Yet Cisco wasn’t the only one recognizing the impact of the campaign. In fact, the company earned a Leading Lights award for Best Marketing.

Taken alone, the reach of the campaign impresses. But consider this: The whole launch cost one-sixth of a similar launch that used traditional outreach methods.

The ASR launch effectively tore the lid off social media at Cisco, which now truly walks its talk regarding the power of networks. Since then, social networking comes standard with every product launch and print advertising funds have largely moved to social activities. 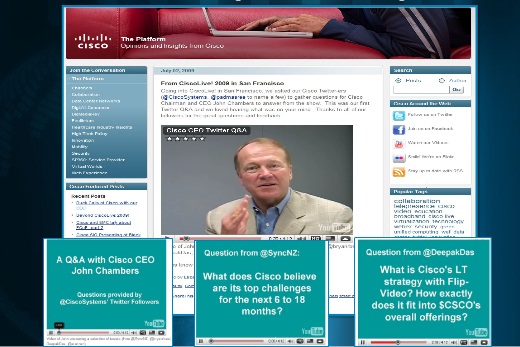 With subsequent launches, the company has realized even greater ROI – now seeing costs just one-seventh of those before. But the networking company keeps pursuing even greater returns with social networking.

“Now that we’ve got that buy-in, we need to just continue to show the success of one campaign over another,” Brill said.

Tools like Radian6 and Symphony help the core social media team, now eight people, measure the impact relative to cost of each campaign. After every campaign, the team just sets new benchmarks to beat.

“Social media doesn’t replace the need for white papers or sales interaction. I think it helps accelerate and shorten the sales cycle,” Brill said. “There are studies out there that people who are involved in communities and engaged with the brand are likely to spend up to 50% more than those who are not. We want to try to prove that.”

“For every product launch, our formula starts with listening. We start a list at least a month before of buzzwords and challenges and then figure out the right tools,” Brill said.

Talk at versus talk with

Product launches of the past communicated at the audience. Now, nearly all activities have an interactive element.

Not everyone’s ready to buy now, especially a six-figure purchase like the ASR. Activities like the online game engaged the loyalty of network engineers, who heavily influence such decisions.

What success have you seen using social media for launches of new products or services? What worked well and what didn’t? Leave your comments in the box below.