Is social media taking over the web?

Just in the last year, the number of social media users has continued to climb at record speed and the audience demographics have widened. And marketers have noticed the trend.

For proof of social media’s steep rise, take a look at the number of statistics that surfaced in the last month.  These findings further support what most of us already believe:  Social media is only getting bigger.

75% of U.S. Households Use Social Networking

Nielson Company, in their report “Internet & Social Media Consumer Insights,” just released some impressive data on social networking activity in the U.S.  The company reported Internet users spent an average of 6 hours, 13 minutes on social networking sites, just in the month of May 2010. That number was just 3 hours, 31 minutes last year.

In addition, the research showed the average U.S. worker spends almost 5.5 hours a month visiting social network sites from the office.  Perhaps the efforts of many companies to ban social networks from the workplace might not be achieving the goal!

Other interesting factoids from the Nielson study:

Out of the top online brands such as Google, Apple and Yahoo!, users spent the most time on Facebook per month than any of the other online brands.  That’s pretty impressive considering Google’s and Apple’s worldwide popularity!

Have you ever wondered how the U.S. compares to other countries in terms of social networking usage? It turns out that Brazil is actually the most active, with 86% of Internet users visiting social networks.  And Australia takes the lead for most time spent on social networking sites.  They clocked in at 7 hours, 13 minutes in April 2010!

When it comes to Facebook’s reach, Italy takes the lead, having two-thirds of the active unique audience in April 2010. Close behind are Australia, the U.S. and the UK with over 60% of active online consumers.  Take a look at the chart below to see how other countries compare.

Social Networking Use Will Reach All-Time High in 2014

In eMarketer’s recent report, “Social Network Demographics and Usage“, it was estimated that 127 million people (57.5% of Internet users) will visit a social networking site at least once a month in 2010.

They attributed the steady rise since 2009 as due in part to the ever-increasing popularity of Facebook. Not only is the number of users growing quickly, but also the audience demographics continue to widen from just teens and young adults. In 2010, they estimated that 59.2% of adult Internet users will visit social networks monthly, up from 52.4% in 2009.

“The connections and interactions that social networking makes possible didn’t even exist a few short years ago,” said Debra Aho Williamson, eMarketer senior analyst and author of the new report. “Status updating, commenting and sharing openly are all activities that will not go away.” 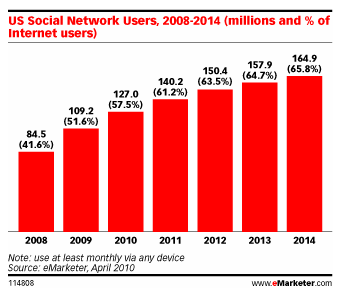 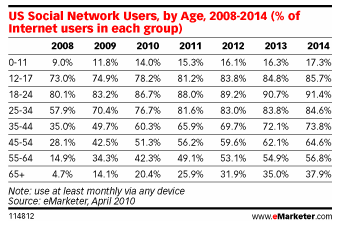 These two graphs show the steady rise in social networking use by 2014.

Now it’s your turn. What do you think of these stats?  Will the rise of social networking sites continue?  Will you continue to increase your social networking usage?  Leave your comments below—we want to hear from you!