On this week’s Social Media Marketing Talk Show, we explore Twitter cracking down on bots and automation with Madalyn Sklar, Instagram DM replay changes, and other breaking social media marketing news of the week!

If you’re new to the show, click on the green “Watch replay” button below and sign in or register to watch our latest episode from Friday, February 23, 2018. You can also listen to the show as an audio podcast, found on iTunes/Apple Podcast, Android, Google Play, Stitcher, and RSS.

Twitter Cracks Down on Automation and Bot Usage: Twitter released a new set of guidelines that prohibits developers from using the Twitter API to allow simultaneously posting identical or “substantially similar” content to multiple accounts or perform actions such as likes, retweets, or follows from multiple accounts. It also prevents users from using any form of automation such scheduling tweets to multiple cards through either third-party platforms or the company’s own TweetDeck. (4:03)

Today, we’re clarifying our rules on automation using multiple accounts, as well as removing any possible ambiguity created by our own implementations. Please read, and note the March 23, 2018 deadline.https://t.co/DDznLRjGvQ

Twitter specifies that developers with apps or services that currently allow users to perform simultaneous actions across multiple accounts must make changes to bring them into compliance with this policy by March 23, 2018.

Twitter Streams Live Broadcasts During Breaking News Events: The Verge reports that Twitter will partner with local news stations to stream their broadcasts during major breaking news events. These new local news broadcasts will be featured in a live-streaming window next to the Twitter timeline during major news events and can be found on both desktop and mobile. (16:53)

New Court Ruling Could Change Embeddable Tweets: A recent ruling by a New York federal judge could have a significant impact on how news outlets use Twitter to access and broadcast stories and may cause publications to reexamine the practices of embedding image tweets within articles and websites. Details on the court case and ruling were originally published in The Hollywood Reporter. (18:57)

Instagram Direct Adds New Replay Options: Instagram expanded the replay options for photos or videos sent from the Instagram Direct camera. Users can now choose to allow recipients to view the message once, replay it temporarily, or see a permanent thumbnail in the chat log with a recently released Keep in Chat option. Previously, all messages could be replayed temporarily but then would completely disappear.

Snapchat Adds GIF Stickers for Stories and Rolls Out New Friends and Discover Screen Tabs: Snapchat rolled out the ability to add GIF stickers to stories. This new Snapchat feature mirrors Instagram’s GIF stickers, which rolled out last month. Giphy stickers are available on the Snapchat app for both iOS and Android and can be found along with existing text, stickers, and other editing options.

Want to gain more marketing confidence and accelerate your career? Is your mission to bring in more revenue, attract better leads, or increase exposure for your company or clients? The Social Media Marketing Society is the ultimate resource for marketers—a place where you can discover new marketing ideas, improve your results, get support, and become indispensable. Join thousands of your peers and receive ongoing training, support from pros, and access to a community of supportive marketers who understand your struggle.

Snapchat also added tabs to the Friends and Discover screens within the app. TechCrunch reports these updates “will make it easier for users on the platform to follow along with the Stories they want to see whenever they want to see them, letting you do things like viewing friends with active stories and Group Chats in one tab and subscriptions you maintain in the other.” The new tabs are rolling out to iOS now and will expand to Android “in the next few weeks.”

Facebook Introduces New Standard Format for Interactive 3D Posts in the News Feed: Facebook added the ability to share 3D posts to the news feed in October 2017. This week, Facebook began supporting the industry-standard glTF 2.0 file format for Facebook’s 3D posts, which means that “artists and creators can easily share even richer, higher-quality 3D content on Facebook from an even greater variety of sources.”

The new format will allow for textures, lighting, and realistic rendering of rough or shiny objects and make it possible for developers to build seamless 3D sharing into any app.

SQUAAAARK! New 3D models on Facebook, you say? Yes please! 😍 Have a play by dragging the below around with your finger or mouse.

Facebook Messenger Simplifies Process for Adding Multiple People to Video or Voice Calling: Facebook Messenger rolled out a new Add Person feature that allows users to quickly and easily add more people to a one-on-one video or voice call on the platform. The ability to add more people to an in-progress video chat or voice call is available on both Android and iOS around the world with the latest version of Messenger.

Facebook Limits Notifications From Active Groups: Facebook is “reducing clutter” in your notifications by limiting the number of alerts users receive from certain groups. Instead of getting notifications about every post shared within these groups, Facebook will now only send “the most relevant Highlights.” However, users can change this option at any time. This new feature was discovered by Mike Stelzner. 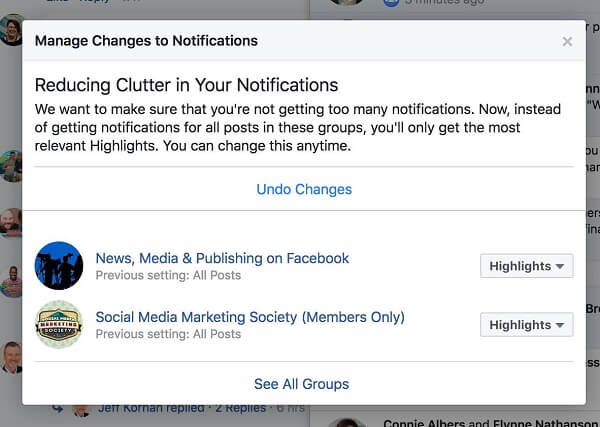 Google Beta Tests AI-Powered Reply App: The Next Web reports that Google is beta testing a new AI-powered app that allows users to “reply to texts from various messaging apps by tapping on contextually meaningful replies right in your notifications.” The Reply app will likely be available on Android once it’s officially released, but Google hasn’t confirmed any details about its launch date.

Google’s Reply app is shaping up to be the messaging assistant of my dreams https://t.co/f7yDQBnUP9

Facebook Opens Registration for F8 Developer Conference: Facebook opened registration for its annual F8 developer conference, where the company showcases new technologies and tools, shares its goals for the future, and explores new ways to build community. F8 will be held in San Jose, California, on May 1 and 2, 2018. People must apply to attend in person, but anyone can sign up to see a live stream of the keynote or follow the conversation on Facebook and Twitter with the hashtag #F8.

F8, our biggest conference of the year, is happening at the McEnery Convention Center in San Jose, CA on May 1 and 2, 2018. Facebook’s annual developer conference showcases new technologies and tools and the amazing work of the developers who are using them. In addition to more than 50 sessions, attendees can experience interactive demos, have the opportunity to meet Facebook product experts and have the chance to interact with our global developer community.

Want to Improve Your Value and Your Marketing Results? The Society is a place where you can discover new ideas, improve your results, get support, and become indispensable!
ONLINE TRAINING SALE ENDS WEDNESDAY!
LEARN MORE