It was a classic business beginning. Two friends, some margaritas, and maybe a little cocktail napkin scribbling.

In 2004, Steven Cox sat down with a fellow musician after a gig. Cox’s friend and his wife were expecting their first baby and hoping to buy a house. But as a musician and private instructor, he struggled with making ends meet.

“Playing music doesn’t necessarily pay all the bills, unless you have a really big contract or gig,” Cox says. “My friend was hanging flyers in drugstores and music stores but still not finding enough students.”

Cox, once a full-time musician, worked a day job in IT and management consulting at the time. When he suggested his friend go online to connect with aspiring musicians, the friend confessed, “I’m a musician. I don’t know anything about that.”

With that, Cox began orchestrating TakeLessons.com.

He Built It, They Came 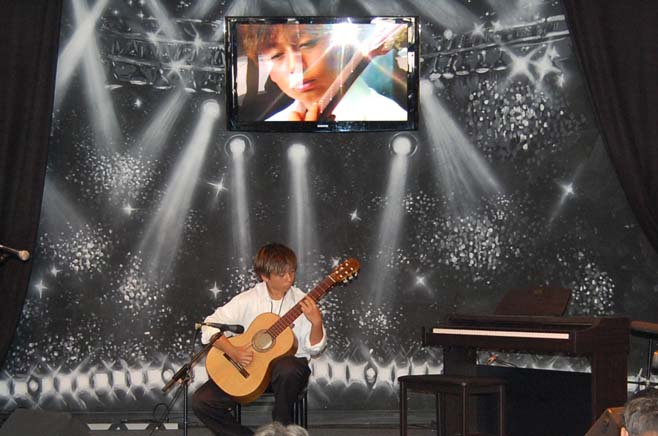 TakeLessons.com provides singing and music lessons in over 2,800 U.S. cities. Students register online for local, private, face-to-face lessons with a TakeLessons Certified Instructor™ after finding each other via a Match.com-style approach.

“It can be difficult in music services to find reputable, trustworthy teachers, especially when you’re inviting someone into your home to spend time with your kids,” says Cox, CEO and founder. “Our customers turn to TakeLessons.com for our rigorous teacher hiring standards, and our online tools are second to none.”

To that end, TakeLessons.com only hires the best out there—just 4 to 5 percent of all teacher applicants.

TakeLessons.com must build awareness among two audiences: potential students (and their parents in some cases) and prospective teachers. With a background in fostering online communities—Cox formerly worked in strategy for a college social networking site—the CEO recognized the value of “getting people together to yak about stuff.”

In 2005, TakeLessons.com gave its audience just that, an online forum. The site not only allowed students and teachers to communicate with TakeLessons.com, but also each other—showing the power of online community.

“Teachers were sharing lesson plans and ideas,” Cox said. “Through the forum, they got quality guidance from each other.”

“So You Wanna Learn How to Play Guitar”

“We want people to consume the content and ideas in the form they want, when they want it,” Cox said.

TakeLessons.com blogs a few times every week on everything from conquering stage fright to recipes for vocal health to to “So You Wanna Learn How to Play Guitar.”

“So You Wanna Learn How to Play Guitar.”

Yet the team only spends two to three hours per week total creating, posting and responding to comments. Their secret? Guest bloggers.

“We’ve got a whole university’s worth of qualified instructors,” Cox said.

In 2009, TakeLessons.com began turning to its expert pool of teachers for content. At once, the company gives its instructors valuable exposure while saving time for the in-house staff, which simply edits posts and populates them with keywords.

Quarter-over-quarter, blog traffic continues to increase, largely due to search engine hits and a Twitter snowball effect. TakeLessons.com micro-blogs on Twitter one to two times every day, directing followers to the blog.

Tracking traffic patterns, TakeLessons.com knows that blogging and tweeting continuously increase traffic back to the TakeLessons.com blog. The company’s approximately 650 Twitter followers share with their own followers via retweets.

Yet TakeLessons.com takes a more casual approach to Twitter than many.

“We decided to let Twitter build organically and let true followers become followers, so we don’t follow others to get them to follow us,” Cox said. “We’re trying another way by just writing what’s relevant to people.”

For just $150 for a high-def Flip camera and a little bit of time, the company has generated tens of thousands of views that include the TakeLessons.com logo or name, generating valuable brand exposure and website traffic.

Most often, the company shoots video of “Show What You Know” recitals, where students of all ages play publicly for the first time. Each clip kicks off with a screen of the TakeLessons.com logo.

The company racked up some of its biggest views—nearly 50,000—with a video response to a current event. When a musician whose guitar was broken on a United Airlines flight spoke out via a music video (“United Breaks Guitars”), Cox responded with a video. He offered to lend his own Taylor guitar to the musician, and indicated the company had switched a recent flight from United to Southwest in solidarity.

Not everyone agreed with Cox, but he chalks it up to the nature of social media.

“You’ve got to learn to let things slide off your back if you’re going to be transparent and use this medium to get your message out,” he said.

Last but not least in TakeLessons.com’s four-pronged approach: Facebook, with nearly 1,200 fans. Popularity on Facebook exceeded initial expectations. Instead of reaching 1,000 fans in one year, they did it in just six months.

While staff does post links to its free “Teach the Teacher” web seminars, mostly the company encourages fans to share their own news and interact with each other. Fans post notes about their own upcoming gigs, arrange in-person meet-ups, find concert venues, or connect to play gigs together.

Here, TakeLessons.com gets back to its roots of community building. Teachers interact and encourage each other separate from the company.

In a smart move, TakeLessons.com automates Twitter and Facebook updates for its customers. When students sign up on the company’s website, they are asked about their goals. From then, they can keep up with their goals—maybe the five songs they want to learn—on the TakeLessons.com website.

TakeLessons.com then asks whether students want to install the company’s API applications for Facebook and Twitter. If so, they are asked what type of information they want to automatically post on those sites.

They can choose to automatically post each week that they’ve had a lesson, after the scheduled lesson takes place. Or, they might be asked if they want to post that they’ve met a certain percent of their goals.

“We try to talk less about us and more about them,” Cox said. “We’re not out pounding our chests, which we find works better in social media.”

In total, Cox estimates that TakeLessons.com spends no more than about six hours every week on social media marketing activities. From there, the various online communities create a viral effect.

“It’s growing beyond us having to physically manage everything,” Cox said. “We’ve become the conduit.”

For that six hours, and virtually no direct costs, TakeLessons.com sees impressive results:

However, Cox values the intangible benefits just as much, namely fostering trust and relationships with customers.

“We don’t want to hide behind a corporate image,” he said. “We want people to say, ‘Wow, there are people behind this idea and this company.’ This aligns with our core values and everything we do. People are getting to know who we are so they’re comfortable making a decision.”