Want to use Twitter Spaces to broadcast live audio? Wondering how to get started?

In this article, you'll learn how to use Twitter Spaces. 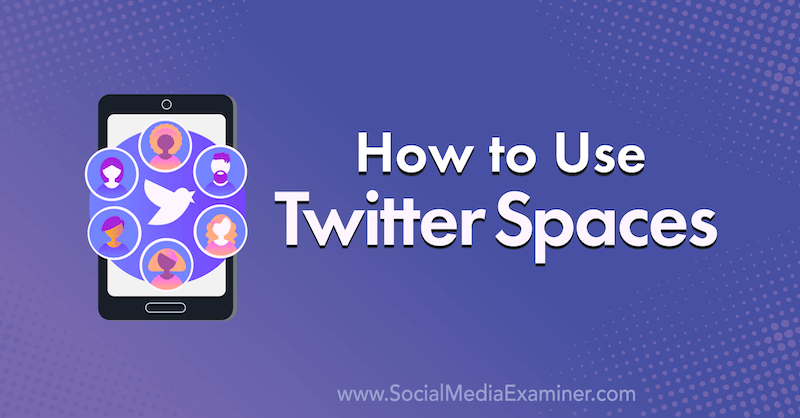 If there's one thing we know for sure by now, it's that social audio chats are here to stay. Twitter has been testing their take on the social audio phenomenon, dubbed Twitter Spaces, for quite some time. And they've recently expanded the service to include anyone with more than 600 followers.

So let's start with the basics—what is a Twitter space? In a nutshell, Twitter Spaces is a live audio chat streamed through the Twitter app. Where there are a couple of features that lend visual components, for the most part, you'll be spending your time either talking or listening in a space with like-minded people about any number of topics.

The best way I can think of to describe Twitter Spaces is to imagine a Twitter chat broadcast over a podcast. It's a live gathering of people to discuss issues, bounce ideas off of each other, and exchange words.

When I described the idea of audio chat to a friend of mine, they shied away from the idea, likening it to being on the telephone. For some, phone calls can be draining and ringtones intrusive. But audio chats, although done over the phone, don't feel the same way. They're not intrusive. You can usually plan for them, working them into your schedule, just as you would a live stream.

Joining a Twitter space is easy. From your mobile device, log into the Twitter app and check out the top of your screen where the fleet normally sits. If you're following anyone who's currently speaking inside a Twitter space, you'll see their picture at the top surrounded by a purple border. 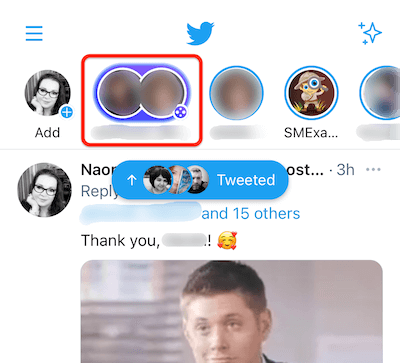 Tap on their profile picture to bring up a preview of the Twitter space. If you're interested in the topic of discussion, tap on Start Listening to join the space as a listener. 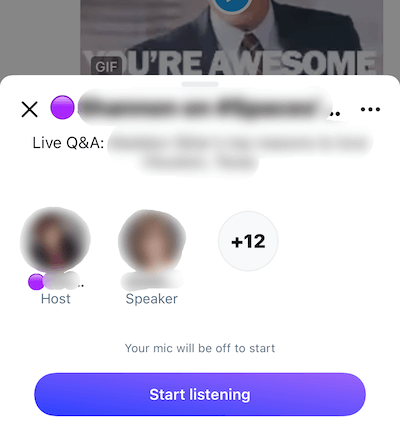 One of the features that I like is the ability to multitask while in the space. So as you're listening, speaking, or hosting a space, you can minimize it and browse other parts of Twitter or in other apps. You can also pull up a preview of any member's profile right there in the space.

React to a Speaker

Reaction emojis are exactly how they sound: They're small emojis you can use to convey a reaction to something a speaker has just said. My favorite part about the reaction emojis is that anyone in the Twitter space—speaker or listener—can use them at any time.

Just tap on the reaction icon and choose from one of the five available reaction emojis. 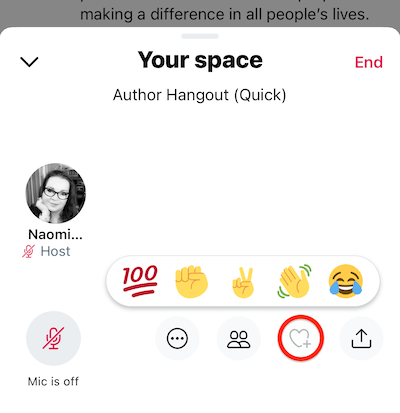 The emoji will appear over your profile picture, briefly blotting it out from view, and then will shrink, giving everyone a chance to see your reaction.

As of right now, if you have at least 600 followers, you can host a Twitter space.

To start a new space, tap at the top of the screen as if you were going to be starting a new Twitter fleet. In the menu at the bottom of that screen, scroll all the way to the right to find the option to start a new space. Then tap on the Get Started button. 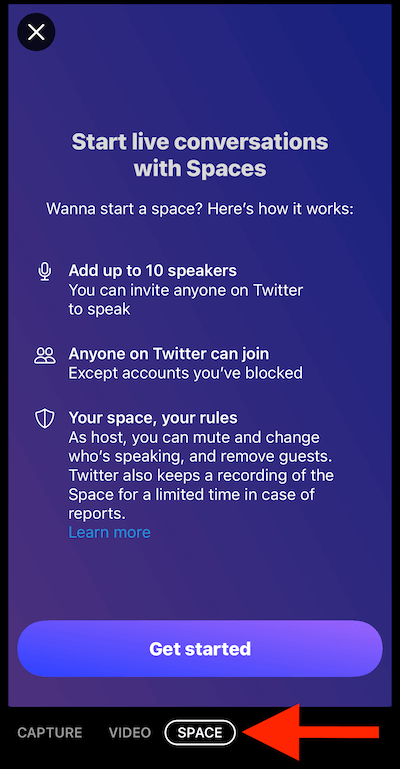 Now give your space a name and tap Start Your Space. 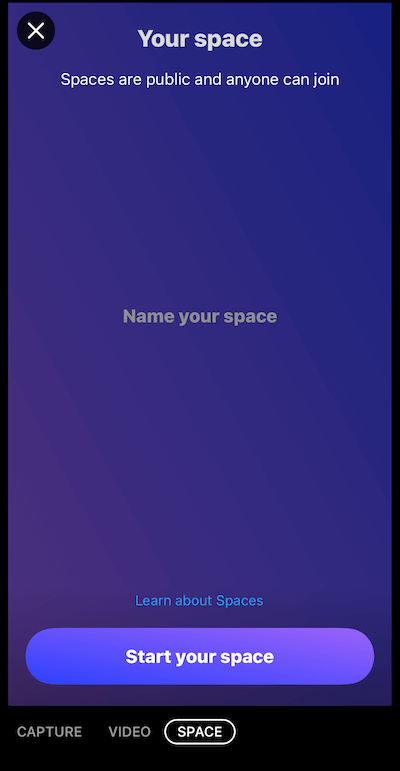 There will be a brief pause as the app tries to connect and build the new space. It took an average of about 3 to 4 seconds every time I started a new space.

Once it's done connecting, your space will open up at the bottom of the Twitter screen, with your profile photo showing as the only person. Your microphone is off by default. When you're ready to speak, simply tap on the microphone icon to turn it on. 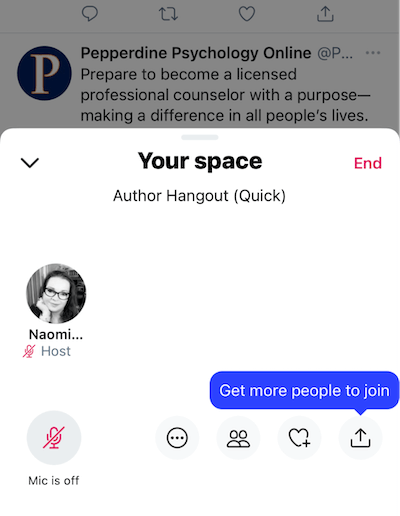 The settings menu contains several tweaks and adjustments you can make to your Twitter space to enhance the experience. To open this menu, tap on the circle icon with the three dots and select Adjust Settings. 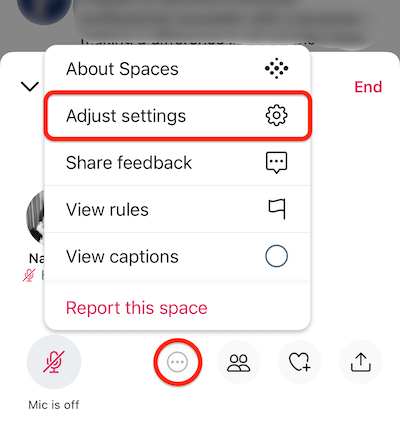 On the next screen, you'll see options to allow or restrict people from becoming speakers or showing captions while speaking. 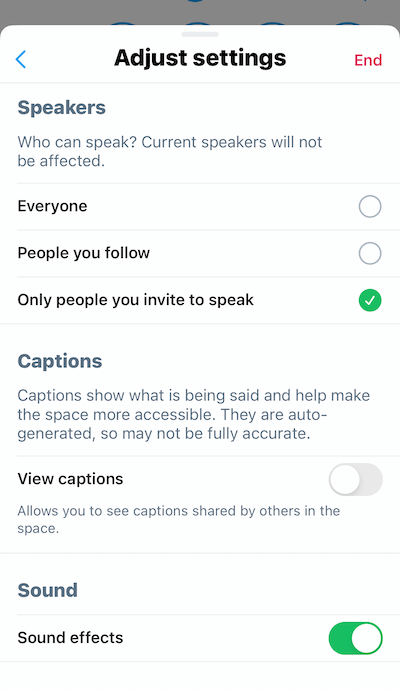 The sound effects aren't nearly as exciting as I thought they were going to be, but they do sound a little chime whenever someone takes an action within your space, such as entering or leaving.

If you experience any problems within your Twitter space, you can hit the icon to share feedback or report the space. And if you need to refresh your memory on the rules of Twitter Spaces, you can do that by tapping on the flag. 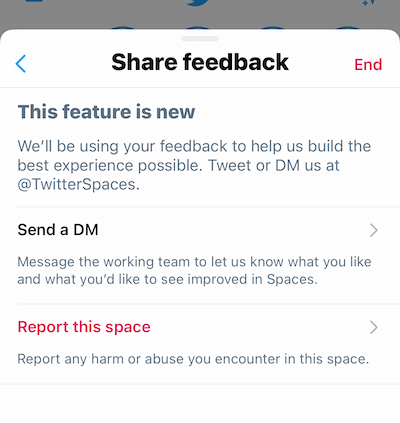 You can learn more about Spaces by selecting the top option. This will bring you to a good article on Twitter about the Twitter Spaces feature, how it works, community guidelines, and best practices, and their roadmap for planned features.

At the bottom of your space, you'll find the share icon at the far right. Tapping on this icon brings up options to share your space through a direct message, by tweeting about it, or by copying the link to send it through a different platform. 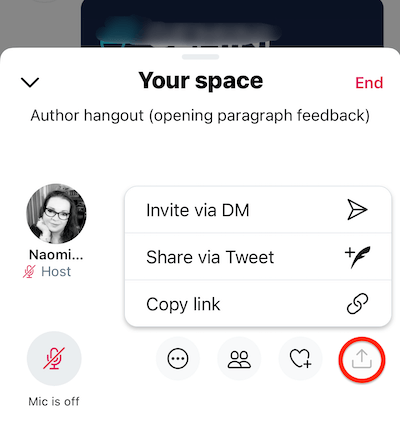 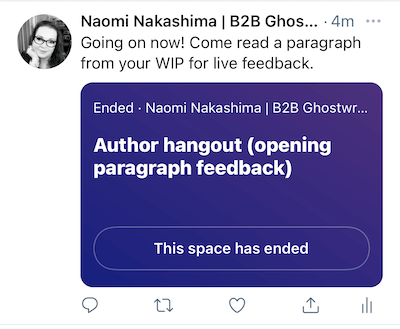 #4: Talk to and Engage With People in Your Space

To see who's already in your space, tap on the members icon, which is the icon showing two people. If your space happens to be fairly crowded, you can use the search bar to find a particular speaker or listener.

Inside a Twitter space, people will have one of three roles—host, speaker, or listener. 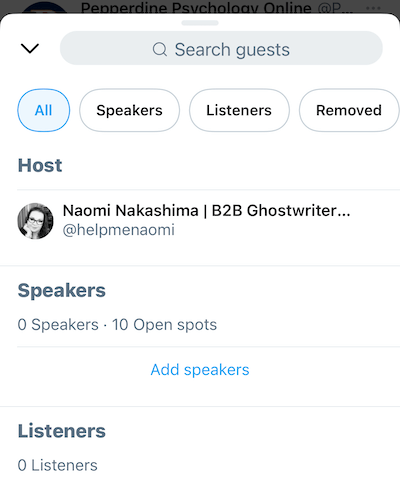 Hosts are the people who created the space and are hosting the discussion happening within it. As a host, you can invite anyone to be a speaker. Twitter lets you have up to 10 speakers at any time inside your space. Both speakers and hosts have the ability to turn their mics on or off to jump into the conversation and be heard. 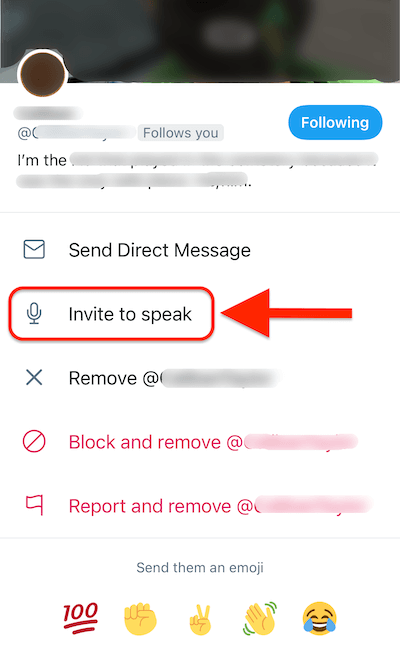 As you'd expect, listeners simply listen to the conversation that's going on and can react only through a reaction emoji or by leaving the Twitter space altogether. 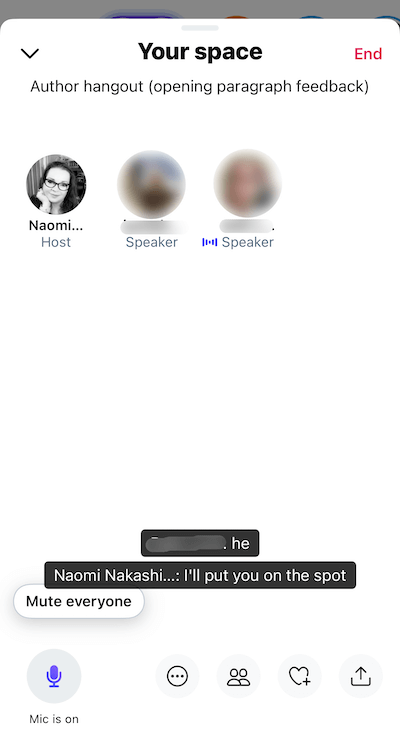 As you're using Twitter Spaces, there are a couple of things to be aware of, which hopefully will get resolved as time goes by. One concern is that the captions, while handy, cannot really be adjusted much. The size is the size.

Additionally, the captions cover up some of the names of the people in the room. In smaller rooms where you know everyone, this may not be a big deal, and if you're speaking in short sentences, they may not cover up many of the names at all.

But if you're having an in-depth conversation and the words are flowing, those captions can get very long and start to cover up the entire window. This could make it hard for people to read the captions and also see who's speaking because the faces will be covered up. 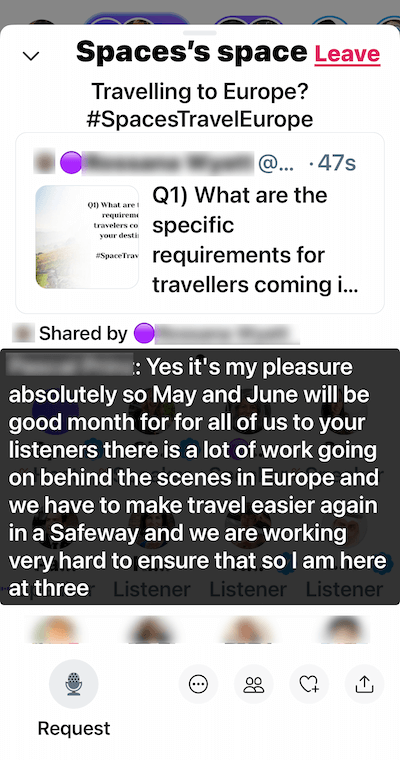 Speaking in short sentences and moderating the pace of your speech can help overcome this.

If the discussion goes off the rails inside your Twitter space and you need to grab attention or quiet things down (either to take a poll or to keep the discussion moving), you can hit the button to mute everybody.

If you're using your space to discuss articles, videos, or other resources you've shared over Twitter, you can share those tweets directly into your ongoing Twitter space. 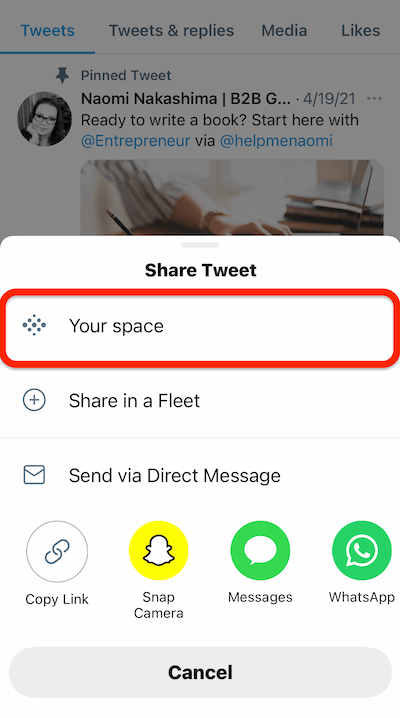 Your tweet will then appear at the top of your space so everyone can see and tap into the post you're talking about. 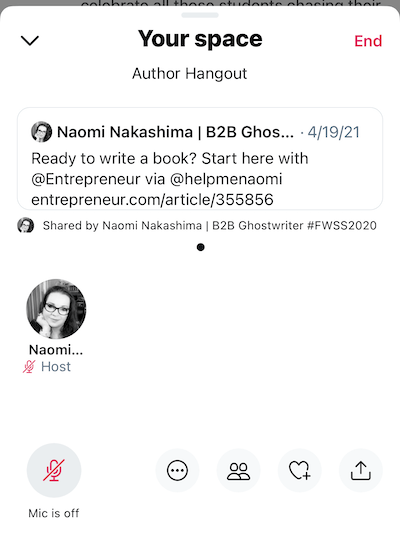 When you're ready to close out your Twitter space, hit the End button in the top-right corner. Twitter will then ask you to confirm you want to end the space. You can go ahead and hit Yes, End. 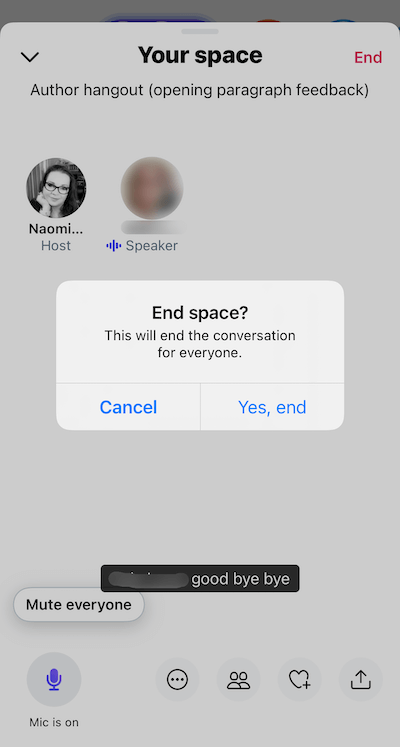 It goes without saying that any brand can benefit from connecting with their ideal clients and customers over social media. Those benefits increase when the engagement is genuine, consistent, and valuable. Twitter Spaces allows the perfect opportunity to bring such a conversation to your community.

If it isn't obvious by now, conversation and authentic engagement are the future of social media. Social media platforms have been striving to provide brands with the means of connecting and engaging with their communities since their beginning. They've given us comments, replies, GIFs, video replies, and now audio chats.

The primary difference between audio chats and other modes of engagement is in the production. For nearly anything else, you need to employ a tool, take a picture, create an image, or record a video. But inside an audio chat, you simply need to turn on your microphone and talk.

With the number of services that are implementing or announcing their own version of audio chat, it's safe to say that this is something people want. They want to be able to talk to brands without having to wait for a response or wait for the time it takes to create a video or a blog post. It's conversation without content creation.

Of course, this isn't to say that content creation is on its way out. On the contrary, content creation in content marketing is becoming more important than ever, having spawned the term “creator economy.” Long- and short-term videos, tweets, posts, infographics, articles, blogs, vlogs, and podcasts all have value for the foreseeable future. It's just that now they're going to need to make room for audio as well.