If you're new to the show, click on the green “Watch replay” button below and sign in or register to watch our latest episode from Friday, May 11, 2018. You can also listen to the show as an audio podcast, found on iTunes/Apple Podcast, Android, Google Play, Stitcher, and RSS.

Facebook Enhances Live Broadcasts With Persistent Stream Keys, Crossposting, and Live Rewind Tools: Facebook introduced three new live video updates that are “focused on making it easier for publishers to go live on Facebook.” The company is currently testing the ability to rewind live videos from pages while broadcasting and plans to roll out this feature globally. In addition to Live Rewind, Facebook also rolled out the ability to crosspost live videos to multiple Facebook pages as an original post and persistent stream keys with an encoder, which make it easier to collaborate across teams and locations for live productions. (5:53 and 19:38)

Facebook Updates Video Retention Metrics: Last week, Facebook introduced upcoming video retention breakdowns and insights that will be available to all pages in their Video Insights. In the coming weeks, page admins will have access to more data on audience retention from followers versus non-followers of their page, a breakdown of audience retention by gender, and zoom charts that give them a “closer look at the data” and allow them to “better visualize the engagement throughout the video.” In addition to these improvements, Facebook has also fixed a bug in the video retention graph to make it more accurate and reliable. (16:40) 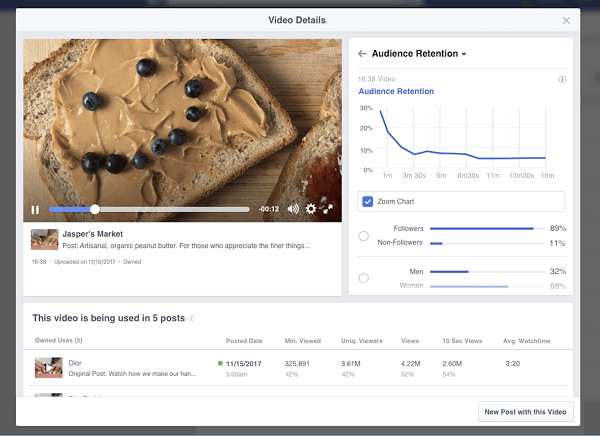 Instagram Adds More Tools for Connecting and Communicating With Customers: Instagram added new call-to-action buttons and a better way to organize Instagram direct messages. Important new customer messages sent to a business account can now be found in its main Direct inbox, instead of a pending folder. Users can also star and filter messages. In the coming weeks, Instagram will begin testing quick replies that will allow admins to easily respond to common questions. (24:50) 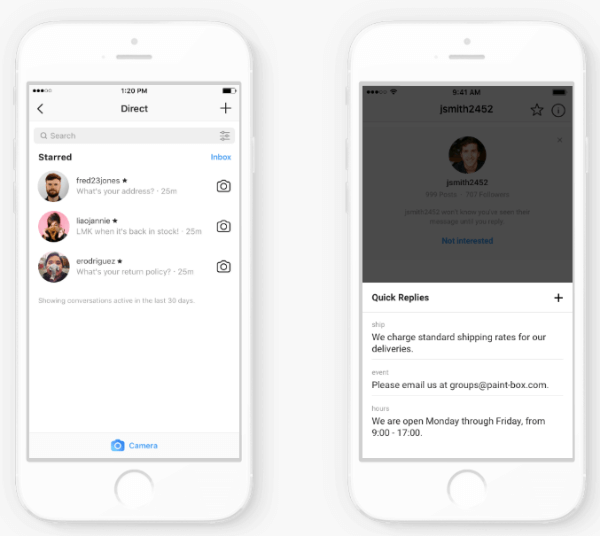 Instagram also debuted new action buttons, which allow users to complete transactions through popular third-party partners without having to leave Instagram. The new action buttons are currently only available with select business partners such as Eventbrite, Fandango, Booksy, OpenTable, and others, and additional partners are “coming soon.” Instagram provides step-by-step instructions a how to add Action Buttons to your business profile. Instagram also notes that “some of these partners are also available for an action button on Facebook Pages” and suggests that businesses enable this feature on both platforms.

Instagram Tests Native Payment Option: Instagram is testing a native payment option within the app with “a limited set of partners and businesses.” TechCrunch reports that users will be able to register a debit or credit card and security PIN as part of a profile and use the payment feature at restaurants or salons when reservations or appointments are booked within the Instagram app. The terms of service for Instagram payments are subject to the same rules as Facebook's payment system. This rollout appears to be limited to the U.S. and the UK. (29:24)

Instagram Experiments With Music Stickers: TechCrunch reports that Instagram appears to be testing a way to “automatically detect a song you're listening to and display the artist and song title as just a visual label” on your Instagram stories. The company is also testing “music stickers,” which could let users search for and add a song to their posts. This technology would be made possible by the numerous licensing deals with major record labels Facebook has recently signed. (34:00)

Soundtracks are the new frontier for Instagram Stories https://t.co/F0ifDGBuGw

Instagram Debuts New Way to Poll Friends and Followers in Stories: Instagram announced a new variation of its polling sticker for Stories. Now Instagram users can add an emoji slider that allows them to ask and answer questions with an animated emoji on a sliding scale instead of simply picking between two options. Instagram's emoji slider is available as part of the latest Instagram update for Android and iOS. (37:21)

Instagram’s emoji slider is a new way to poll your friends https://t.co/wUI3SBH2Hu pic.twitter.com/IYAapzJAml

The Verge reports that the latest iOS update to WhatsApp also includes the ability to add and revoke admin privileges from other users in a group chat and gives admins the power to edit the subject, description, or icon of a chat already in progress. WhatsApp hasn't confirmed if or when these same features will be available for Android users.

Twitter Might Soon Add Encryption to Direct Messages: Twitter might be testing end-to-end encrypted direct messages called Secret Conversations. While Twitter hasn't confirmed if this new feature will launch, code for this option was discovered inside the Twitter for Android application package (APK), which is where the code for unlaunched features that companies are quietly testing or will soon make available are often housed.

Facebook Develops Facebook Avatars: Facebook introduced personal avatars for its social VR platform, Facebook Spaces, in 2017. The VR avatars were automatically generated based on photos using machine vision and artificial intelligence, but could be customized with different facial features, hair color, skin tone, and more. Hidden code discovered with Facebook's Android app reveals that the company may be releasing a similar feature within Messenger.

Facebook Avatars appear to be similar to Snapchat's Bitmoji integration. However, Facebook hasn't yet provided any specific details about the new feature other than it's still in early development. Facebook also hasn't yet confirmed when it will start publicly testing it.

YouTube Tests Picture-in-Picture Mode for All Users: YouTube is reportedly testing a picture-in-picture mode outside of the app with a select group of non-YouTube Red subscribers. Up until this point, the feature was only available to Android users who subscribe to Red, YouTube's subscription service in the U.S., Australia, Mexico, Korea, and New Zealand. The Verge reports that this test is only running in the U.S. on Android devices with Android 8.0 Oreo or above.