What makes Adele a better singer than Rebecca Black?

Is it her magical vocals or her higher Klout score?

And if Seth Godin (Klout score: 0) chooses not to interact on Twitter, does that mean he’s less influential than Uncle Pete, whose Klout score is 35?

These are some of the tricky questions that are being asked since the emergence of new systems that attempt to measure people’s online influence through “social scoring.”

But the question is this: How exactly is “influence” measured? And how do those who make such personal yet inflammatory verdicts decide the scores?

You Have Become a Number

The measure of your “personal power” is your Klout score. The higher your score, the more “powerful and influential” you are. A high Klout score (say 70 and up) will almost guarantee your chances of getting a better job, higher social status and maybe even better luck on the dating scene!

Believe it or not, there are people who are taking this number very seriously. Some have even started to question the wisdom of going on long vacations after working so hard to build up their Klout scores.

In his book Return on Influence, Mark Schaefer explores these controversial new developments, discusses why they’re important for businesses and why you should be taking notes.

If you want to become more influential—or just want to figure out who the influencers are—here’s what you need to know about Mark’s latest book.

Mark Schaefer wrote Return on Influence to help you understand how you measure up on the social web and what that score means to your career or your business.

“Why must I measure up?”, you ask. Because there appears to be a fascinating connection between unprecedented business opportunities and this new thing called personal influence.

For the first time ever, companies can now identify, quantify and even reward valuable word-of-mouth influencers who have the power to drive demand for their products.

While the idea of being rated by some obscure online system seems outrageous, the fact is you ARE being judged whether you like it or not! And so you need to educate yourself about this issue so you can make some important decisions of your own. 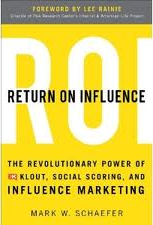 At 206 pages, Return on Influence (ROI) is a highly readable and provocative book. It introduces the notion of “personal power” on the social web, but it also cautions that influence is by definition elitist.

Through dozens of stories, interviews and case studies, Return on Influence will sway the way you think about your own power, how to leverage it, and of course, how you can increase it (if that’s what you want!).

Fair warning—If you’re lucky enough to have a high Klout score, you will LOVE this book! You’ll even pay closer attention to the care and nurturing of “your number.”

But if your score is low or mediocre (50 or less), then prepare to be thoroughly unnerved. In fact, you’ll probably be offended!

When Virgin America opened their Toronto route last spring, they asked Klout to find a small group of influencers to receive a free flight in the hopes that they would effectively spread the word.

Calvin Lee, a graphic designer from L.A., was one of the lucky ones on that free flight simply because he was a prolific tweeter. Lee, who describes himself in his Twitter profile as a “social media ho,” is a human news service. When Lee tweets, people respond and his growing influence has won him celebrity-status perks.

Lee says, “I tweet at least 200 times a day… I look for interesting links from my friends and sift them through for good stuff… I think people feel that I’m a real person who is part of their lives.”

These days, you don’t have to be George Clooney or Lady Gaga to get an invitation to the exclusive world behind the velvet rope. Brands are turning to regular folks (like you!) to tell their stories. Instead of spending millions of dollars on television ads, they’re inviting thousands of people—citizen influencers—to talk about their products and influence their friends.

Social proof is the idea that if you have a high Klout score, thousands of followers or hundreds of retweets on your blog posts, then you’re worthy of people’s attention. But let’s talk this through, shall we?

There are those in the online world who appear to have power and influence, even without a shred of experience, intelligence or accomplishment.

While he (Matt) engages on a one-to-one basis with his followers and tries to deliver useful content, the other account doesn’t engage, network or do anything for anyone—it simply doesn’t care.

So the question is, how did Klout assign this spammy account a higher measure of influence than an authentic person?

Mark concludes this section by reminding us that true and lasting influence is not the ever-changing badge of scores; rather, it’s about humanity, credibility, meaningful content and an engaged group of followers.

Reciprocity too is another thorny issue.

That’s because much influence on the social web is built on a promised return of favors; for instance, “You retweet this and I’ll retweet yours” or “I’ll like your page if you like mine.”

The trouble with reciprocity, as we know, is that it’s not always clear if you’re leveraging your relationships or just using people. Doing favors so that people owe you favors should never be the motivation behind developing relationships. But who knows what someone’s true intentions really are?

Increasing your own Klout score boils down to three practical steps:

1. Build a relevant network that includes a content strategy and a network strategy.

Provide content that delivers some kind of personal or business benefit to a targeted audience that is interested in you and what you’re doing.

Have more people following you than you follow on Twitter. However, the size of your network isn’t as important as having those people react to your content.

Don’t just accumulate followers or only send links. Followers who never interact with you will not help your score. Neither will sending out links 100% of the time because it says that YOU can’t be influenced into acting.

2. Have a strategy to provide exceedingly useful, helpful, interesting and entertaining content.

Create the kind of content that will survive longer and be passed along for several days—this really rocks your Klout amplification.

Finally you must be consistent. This is one of the most controversial policies of Klout, but if you stop participating in the social web for even a few days, your score begins to drop!

3. Systematically engage influencers who are most willing to distribute your content.

Klout has made it clear that engaging with people with higher scores will tend to increase your own score as well.

If you’re able to engage with influencers and they in turn respond to you, this is a validation of your potential power.

Try to connect with your offline friends and turn online connections into offline friends. In both cases, these people will be more willing to engage with you and share your content along.

When networking offline, make sure people know how to find your online platforms so that they can engage with you there as well.

Mark’s latest book has definitely earned itself a space on your shelf. It’s highly significant, extremely relevant and you’d be ill-advised not to read it. But the subject matter is not pretty—quite the opposite, frankly.

But to Klout-less rebels such as myself, Mark would argue that it has some value: Companies can now (cost-effectively) identify the people they should be interacting with, Klout helps to monitor and filter engagement and it opens up new marketing channels.

Mark presents a fair and balanced perspective on this hot button issue and he doesn’t sugar-coat the problems with Klout either. He is not saying that Klout is good or bad—just that “it is what it is” and that people are taking note of it.

In the end it’s your call, but Mark wants you to answer this question for yourself: What is true and lasting influence? After all, Seth Godin had clout even before Klout was Klout.

What do you think? Leave your questions and comments in the box below.