Twitter is a networking haven for businesses. But is there an easy way to draw the right people to you with Twitter?

The answer is yes and there's a great Twitter feature that can help you: Twitter lists.  Twitter lists can grab the interest of people you most want to meet, help you make a great first impression and can help you with marketing segmentation.

Below I'll show you some unique ways to use Twitter lists.  But first…

Twitter lists creates separate lists of people. If you haven't already used Twitter lists, watch this video to see how you can get started.

There are two interesting points to remember about Twitter lists:

Now here's a look at what you can do with Twitter lists.

Twitter lists are great to monitor and listen to different groups of people.  No-one else can see your private lists, so this is a good place to start using the Twitter list feature. You can create private lists to:

Private Twitter lists can help you segment the fire hose of information streaming in through your Twitter feed, according to Rohit Bhargava. Segmenting people into lists also helps you more effectively listen to and  monitor your market.

John Jantsch says Twitter lists make it easier to listen to what others have to say.

And monitoring people without following them makes it easy to carry out specific market research or intelligence gathering.  Once you've finished doing your market research, you can simply delete your list without making any changes to the people you usually follow.

#2: Craft Your Brand With Public Lists

There's not much space to brand yourself on your Twitter profile page.  You do have space for a few words in the bio box and you can add in background graphics.  But you can also add another dimension to your branding by carefully crafting your public Twitter lists. Here's how.

Choose appropriate names for your lists
Spend some time finding the best name for your list.  There are a few things to keep in mind when naming your Twitter lists: 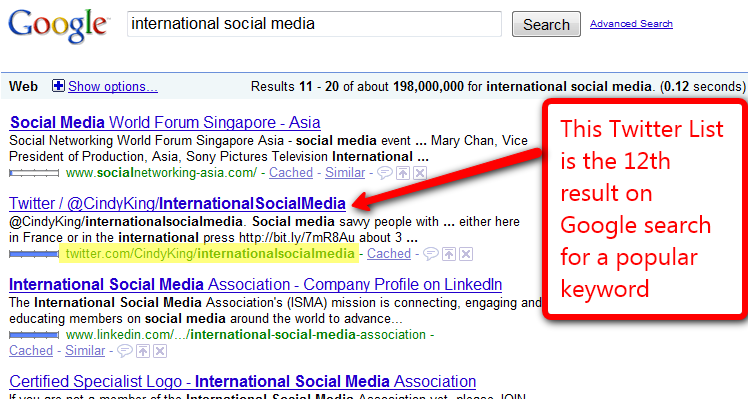 The bad news is that if you change the name of your list, the URL of your Twitter list changes too and you'll lose the people following that list. So take some time to get this right.

Choose appropriate Twitter lists for your public profile
When creating your Twitter lists, you want to think of how lists help you: 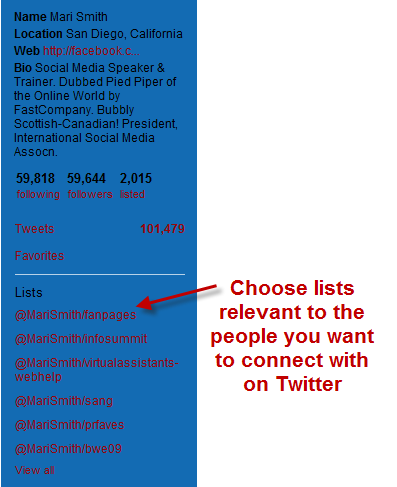 Choose the number of public lists
Remember, there's a limited amount of space available for your Twitter lists on your home page.  Although you can create a larger number of lists, only about 4 to 6 will appear on your home page depending on the character length of the names of your lists.  Your audience will have to click on the “View all” link to see all of your lists if you have more than this.

So you may want to think carefully about the number of lists you want to create and the order in which you create them. Put your most relevant lists at the top. 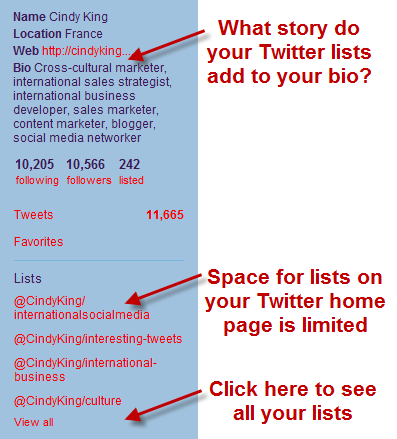 Twitter's list feature can add some extra marketing power to your Twitter strategy if you take some time to get it right.  You also need to find the right way to make your lists work for you.  This will depend on your goals for Twitter, your audience and how they like to connect with you.