Three 30-something guys are surfing The Long Tail and demolishing the boundaries of traditional television broadcasting along the way.

But you won’t find them out on the town, shooting original videos of breaking news stories. They do that occasionally, but they are primarily “remixers” who take snips of existing videos and splice them together to create a mashup. And they broadcast many of these mashups on their show, streamed live on Livestream. 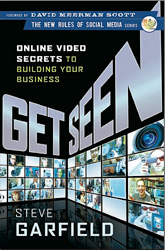 “The general idea is to create a sort of on-the-fly television station for an hour, in which each of us has a folder full of videos to choose from,” Quirk told Steve Garfield, author of Get Seen: Online Video Secrets to Building Your Business. “The entire time, we are interacting with the viewers in the chat room, taking requests, and answering questions.”

And they have approximately 100,000 viewers every month.

They also use instant messaging to chat with each other during the broadcast, because Adam lives in Brooklyn, Erik lives in Vermont, and Aaron lives in Michigan.

When you watch CNN news on your TV, do the producers interact with you while you sit in your living room? Do they use a chat box to take requests and answer questions? Do they accept amateur videos from “citizen journalists”?

They do on their Ustream channel. They’re not actually live-streaming 24/7 yet, but stay tuned.

Garfield interviewed Quirk and many other “early adopters” of online video for his book, which is literally a user’s manual on creating, uploading, distributing and live broadcasting online videos. This is not the kind of book you read on vacation. This is the “bible” of online video production and distribution, written by one of the first guys to put videos on his blog.

But it didn’t take long for Garfield and other video enthusiasts to change the game completely. Haven’t we always heard that a picture is worth a thousand words? Isn’t a video a lot more engaging than a text-only blog post?

And it was just a matter of time before people stopped putting videos on their blogs, and began vlogging. The video IS the blog post!

When Garfield attended a September 2008 Barack Obama rally in Boston, he took along his Nokia N95. By livecasting the rally using Qik.com and wi-fi, he was able to use the cell phone to shoot the video and simultaneously receive text messages from viewers who were watching the rally on his website.

Did you get that? This is viewers interacting live with a video producer on his website while he’s streaming a developing news story.

And the BBC has a Seesmic channel that lets viewers and listeners post video comments on their stories. “In video, we’re just not used to [that],” says Loic Le Meur, founder and CEO of Seesmic. “We’re used to being passive in front of a TV. It’s going to change.”

In other words, television will become another social media platform. “I don’t see why TV should still be this 1950s, one-way medium that you talk and I can’t answer,” Le Meur told Garfield. “So, we’re going to make it many-to-many both ways.”

Garfield writes about the time he was having trouble recording a cable show on TiVo. He called Comcast, but somehow he couldn’t explain the situation adequately over the phone. So he offered to use his cell phone and Qik to stream his TV screen to Comcast while he talked to customer service on his landline phone!

Imagine being able to stream a video of a consumer product problem to the company’s customer service department. No need to pay a repair person to come to your home and diagnose the problem.

And what about all those birthday parties, the cute things your kids do when you least expect it, and the time you ran into a local county official in the grocery store? All of those moments that you want to remember forever. Wouldn’t it be great to be able to record a quick video of the event?

You can start very simply. Does your cell phone record video? Just buy a good mic and maybe an inexpensive light source. Use a separate mic, not the built-in mic. Several people Garfield interviewed for his book recommend spending more money on a good light source and a good mic than you spend on the camera.

But if you want production-quality videos, Garfield’s book covers all the options you need. Here’s a quick rundown of the type of information you will find in his book:

If you have asked any of those questions, Garfield has the answers. Including step-by-step instructions and plenty of screen shots.

He also interviews at least 40 of “the best video producers,” including Thomas Gensemer, managing partner of the company that managed Barack Obama’s online video campaign during the 2008 presidential election.

The interviews are scattered throughout the book and are also available on Garfield’s website. As video interviews, of course!

So are you ready to push the boundaries of television broadcasting? Or do you just want to start recording important events in your life?

If so, here’s good news. You don’t have to pay hundreds of dollars to take a video production class at your local college. Or thousands of dollars on video equipment. Just pick up a copy of Get Seen and a $150 Flip Ultra camera.

That’s all you need to start.

And check out these related articles:

Are any of you vlogging or using video in innovative ways? How has video helped your business? Share your knowledge and experience in the box below…

About the authorRuth M. Shipley

Ruth M. Shipley is a freelance researcher and writer who loves to write a good story. Because that’s what most people love to read! See her Social Media Examiner page for more stories about social media books.
Other posts by Ruth M. Shipley »