In this article, you’ll learn how to use Facebook’s organic video post testing feature to find out which thumbnails, titles, descriptions, and video version your audience prefers. 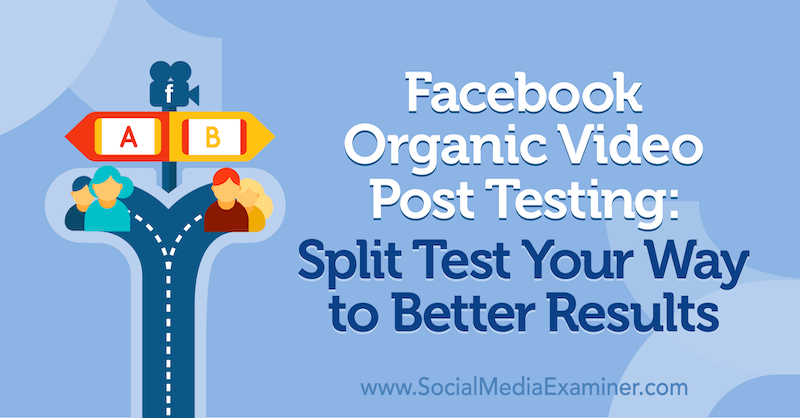 Over the past couple of months, Facebook has been rolling out their new organic post testing feature, allowing users of Creator Studio to use the same philosophy for their paid advertising on their organic marketing strategy.

Before this feature, testing for organic content strength generally meant posting content and then paying attention to the analytics and insights to see if there were drops in any key metrics. If there was a sudden or drastic drop in engagement or reach, you knew you needed to tweak something in the post.

If, on the other hand, your post took off and performed really well—if people were clicking on the links, engaging with the post itself, and the reach was climbing—you knew you had a piece of content that truly resonated with your audience.

Of course, the issue was that a drop in engagement or viewership didn’t necessarily mean you had missed your target audience or put out bad content. There are plenty of factors involved in post performance on social media, especially on a platform as robust as Facebook.

Maybe you posted it on the wrong day and time for your audience, or there was breaking news or other calls for your audience’s attention at the time. Perhaps it needed better copywriting or a different photo, or the same photo in a different format (rectangle instead of square). Or your post may have simply missed the mark altogether.

Without the advantage of split testing, figuring out exactly how to tweak or fix a Facebook organic post that didn’t perform was a long, time-consuming process that didn’t always generate an answer. So the application of split testing to organic marketing posts on Facebook is a new marketing tool that we never knew we needed until it got here. Once you start using this method of organic video post split-testing, we’re going to completely forget how you ever posted without it.

Let’s start with a few basics because split testing has been reserved primarily for paid advertising and you may not be familiar with the term if you haven’t done a lot of paid ad campaigns.

The idea of split testing is to create 2-4 nearly identical posts with just one difference between each post, and test their performance on a very small portion of your audience. At the end of the test, the post that performed the best in accordance with the key metrics you measured will be either sent through a new test against a third post or pushed out to the feed for the rest of your audience.

Essentially, a split test—also known as an A/B test—compares two versions of the same ad, email, blog post, landing page, opt-in, and now organic marketing posts on Facebook. Generally speaking, the differences between the two variations are minimal but sometimes those subtle differences can have a huge impact.

One of the main points to remember when setting up your split test is to test just one element at a time.

In the Facebook organic video post test I’m going to use as an example, the only thing I want to see is whether having a countdown on the video itself will help keep viewers engaged with the video, thereby increasing watch time. Everything else about the two posts will be identical—the same title, description, and video except for the overlay of a countdown timer in the corner of one of the videos.

Testing more than one variable at a time would end up muddling the results. For example, if I also change the title of the video post, I won’t know whether the change to the title or the addition of the countdown timer caused the difference in the post’s performance.

If you want to test multiple elements, set them up as multiple tests. For example, if I wanted to see how this video performs with a longer description, I would take the winner of the countdown test and create a new test between that post and another one with the same video and title but a long-form description.

Another point to keep in mind as you set up a split test is what your threshold is. If you haven’t been posting a lot of content to your page lately, you may need to take time to re-engage your audience and get some posts running so you have a benchmark to test against. 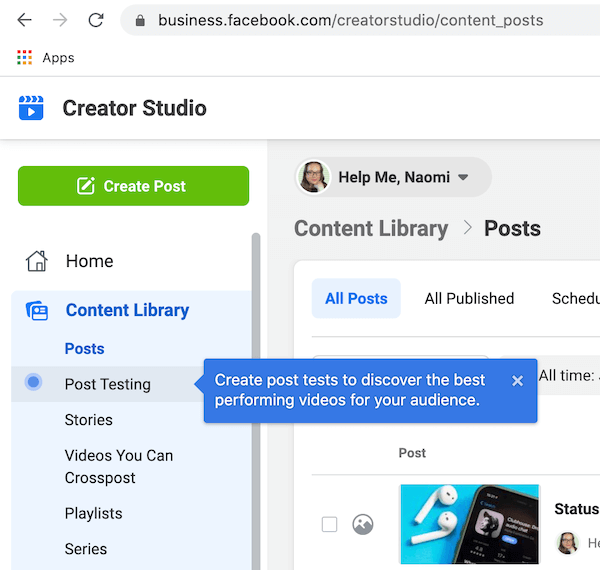 Fill in Your Test Details

Next, start filling in your test details.

Click on the Upload button on the right to choose the video you recorded for this test. 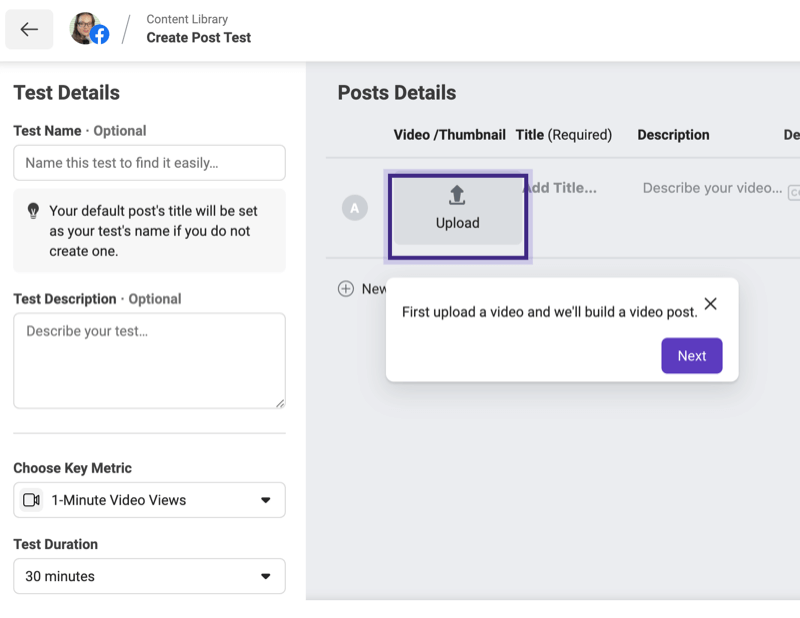 Then provide the rest of the test details on the left. These details will be listed and shown to admins on your page on the back end but not to the public on the front end. So you can add whatever details you want to help you find the test later. 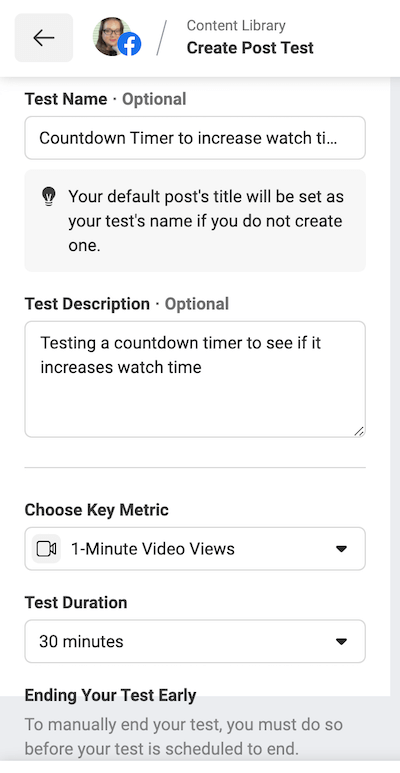 Next, choose how long you want the test to run before the system chooses and publishes a winner. Facebook sets this time to 30 minutes by default but you can go as short as 10 minutes or as long as 24 hours.

It’s important to give your test sufficient time to pull enough data that the results can be trusted. The default is probably enough time for almost any post type. However, if you post at a time when your audience typically isn’t online or your page normally gets low engagement, a 30-minute test may not be long enough to produce the results you’re after.

Another thing to note is that while you can opt to run a test for 24 hours before publishing, you can always end the test early and publish the winner if you like. This can be useful if you have a breakout winner early in testing or if you were simply running a test to validate a hunch. 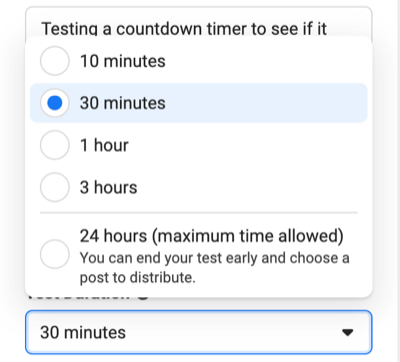 Also select the metric you want to base the test on. Your options are comments, share, 1-minute video views, reactions, people reached, and link clicks. 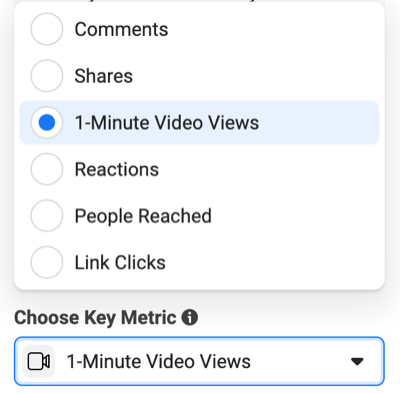 Now you’re ready to fill out the details of the post that goes with your video. Go inside the test editor itself on the main screen of Creator Studio and add the title of the post and the description.

When you’re done, you can add a new post to the test by clicking on the +New button and Facebook will walk you through uploading another video.

If you’re testing the same video with a different title or description, hit the Duplicate button instead of the +New button. This will create a second copy of the first video and allow you to edit the details from there. You can add up to four videos this way.

You also have the ability to mark any of the videos as your default, which means that if all things are equal, that one will be posted as the winner.

Near the bottom of the screen, you’ll see the variables Facebook has identified between the two tests.

Schedule or Publish the Test

When you’re finished setting up your test, you have the option to publish the test right away or schedule the test to happen later. 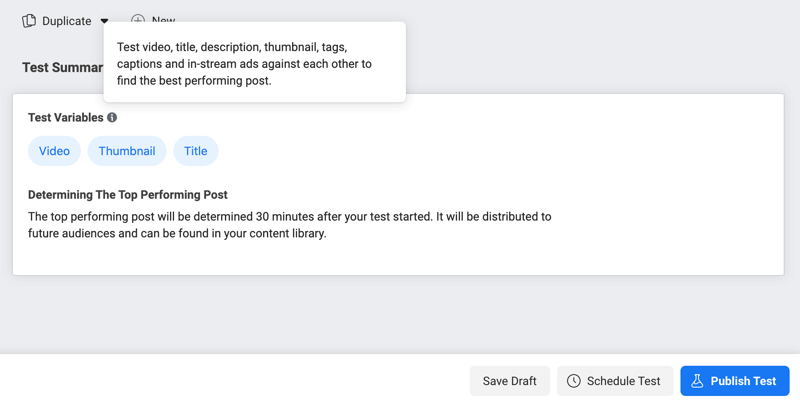 If you decide to schedule the test, it will run at the scheduled time for the amount of time you want, and then the post will be automatically published after. So you want to schedule it for the end time, meaning that if you want the post to be published at 11:00 AM, start the test at 10:30 AM. That’s why you should keep your posting schedule in mind whenever you run these tests.

Once you publish the test, Facebook will show you a confirmation that lets you know the test has been created and the videos are running through Facebook’s video processing. 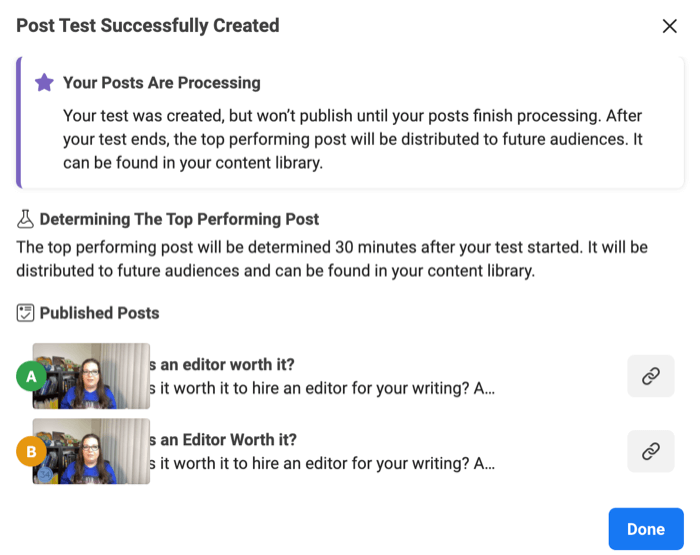 As the test runs, the listing in your content library will be updated to show how much time is left on the test, as well as how much time has already passed.

Once your split test is complete, Facebook will automatically publish the winning post to your page. You can then go into Creator Studio to view the results of the test yourself. 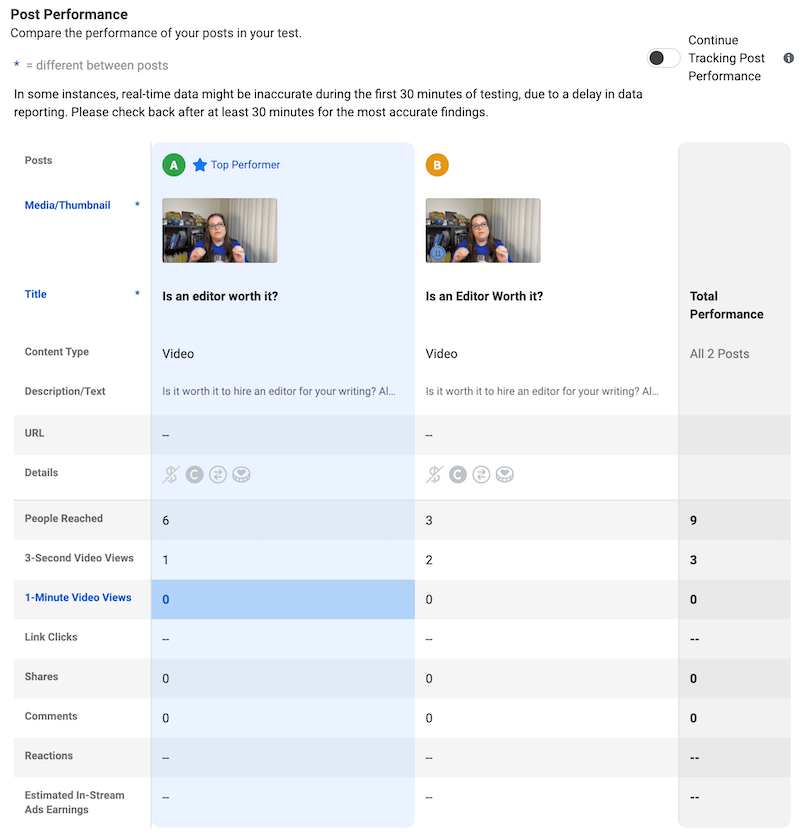 Of course, the losing post will no longer be viewable by the public or any portion of your followers, but you can extract the data and learn from it, download it to use for another time, or even create a new post with it. 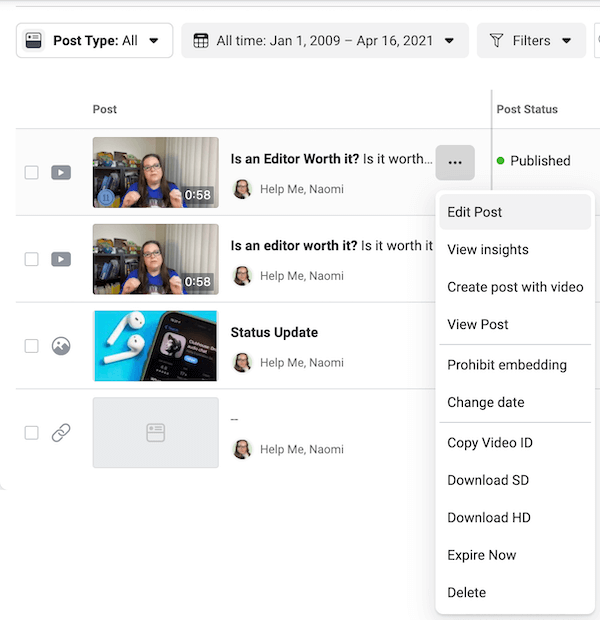 Chances are, no test you run will completely change your entire marketing strategy. Subtle changes between posts can have a significant impact but shouldn’t determine the entire future vision of your content strategy on Facebook. However, with each test, you’ll learn a little bit more about your audience and what they respond to, which, of course, means that you’ll always be posting the best content for your audience.

Everything in marketing is always a test. Testing which copy performs better, which audience is more responsive, which headlines convert better, and which platform offers the best reach.

The best marketers—those who are able to drive reliably sustainable sales every month—have set up their workflows to include these tests. They’re able to take advantage of and maximize their return when something works and immediately make necessary changes when something doesn’t work. Now that Facebook’s organic post testing is rolling out, you can always be sure that your best content goes up first.