If you're new to the show, click on the green “Watch replay” button below and sign in or register to watch our latest episode from Friday, March 16, 2018. You can also listen to the show as an audio podcast, found on iTunes/Apple Podcast, Android, Google Play, Stitcher, and RSS.

Twitter Plans to Expand Verification to All Users: In a Periscope stream, Twitter CEO Jack Dorsey shared that the company is working to expand its blue checkmark verification process to all users and plans “to do it in a way that's scalable.” Twitter's blue checkmark was initially intended to designate celebrities, athletes, and public figures from would-be imposters on Twitter, but was eventually expanded any users who applied and could justify needing verification. Business Insider reports that by making verification more accessible, “Twitter intends to shift the focus of the designation away from any presumption of endorsement and emphasize proof of identity.” (6:16)

Twitter is considering verifying all of its users https://t.co/DQYXo2T5mH by @FortuneMagazine pic.twitter.com/MbiRE7NVfh

Twitter Test Makes News the First Thing Users See in the Timeline: Twitter users could soon see the biggest news events first when opening the timeline. The social media platform recently confirmed a test of a news highlight reel at the top of user feeds. The tested feature would push news, while platforms such as Facebook are putting a lower priority on news items in an ongoing fight against fake news. (13:56)

Twitter is creating new, algorithmically curated timelines of news tweets and promoting them at the top of users' feeds as part of a test https://t.co/iY7RTsCqTA

Snapchat Adds Instagram-Style Mention Tagging to Stories: Snapchat confirms that it's currently testing the ability to @tag someone in a story. TechCrunch reports that this new feature would allow users to call out another person's name, handle, bitmoji, and an Add button so others can follow them, too.

Snapchat Allows Branded Content Ads From Discover Publishers: Snapchat now allows publishers in the app's Discover section to share branded content among the articles and videos they post for professional media partners such as BuzzFeed, Hearst, NBC Universal, Scripps Networks Interactive, and others. Publishers can now work directly with advertisers and sponsors to craft messages and ads that “look more like the rest of their channels and perhaps drive up value for their services on the platform.”

Get More Useful Information With Captions on Google Images: Google is “adding captions to image results, showing you the title of the web page where each image is published. This extra piece of information gives you more context so you can easily find out what the image is about and whether the website would contain more relevant content for your needs.”

Facebook Filters on Personal Profiles: This feature allows mobile users to filter posts in their news feed, allowing them to see posts made on a specific date, published by specific people, and assigned a specific privacy level. This new profile filter feature was spotted on mobile by Michael Stelzner. 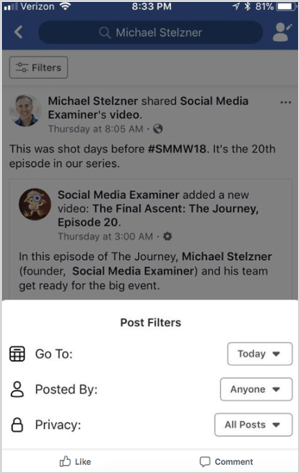 LinkedIn Updates Data and Content Rights in Terms of Service: Driven by the General Data Protection Regulation that will take effect across Europe in May 2018, LinkedIn announced several changes to its terms of service. The platform added more options for members looking to personalize the ads they see on LinkedIn. It also promised to provide more information on how it uses this data to customize its members' experiences on the network and updated when advertisers are allowed to access users' personal information. LinkedIn explains each of these changes with a guided tour on its Privacy Policy page.

WhatsApp Set to Disrupt India Market With Push Into Digital Payments: The messaging app is testing a payment service that lets users transfer money to each other. The feature, dubbed WhatsApp Pay, is only available to a fraction of Indian users, but Bloomberg reports that a full rollout could come to all users by April.

WhatsApp Messages Can Now Be Deleted an Hour After You Sent Them by Mistake: The Verge reports the latest version of the WhatsApp Delete for Everyone feature, which “used to only allow you to delete messages up to seven minutes after you sent them…extends that time limit significantly to one hour, eight minutes, and 16 seconds.”

A new WhatsApp for iOS update (2.18.31) is available on AppStore.
It is a bug fixes update, but it has the new “Delete for everyone” limit, that’s 1 hour, 8 minutes and 16 seconds.

Amazon Adds Follow-Up Mode for Alexa to Let You Make Back-to-Back Requests: Amazon has added a new feature for its Alexa voice assistant that will let you make successive requests without needing to repeat your Echo speaker's wake word, as noted today by CNET. Amazon is calling the new setting Follow-Up Mode, and while it won't let you nest one request into another, it will let you make multiple requests back to back. For instance, you won't be able to ask Alexa to turn off the lights and change the temperature in the same breath, but you can make one request and follow it up with another without needing to say “Alexa” again.

Facebook Tests Location-Based Augmented Reality Effects: Facebook is experimenting with augmented reality experiences triggered by precise location markers in the real world. TechCrunch reports that Facebook is running a closed beta test of this new feature with promotions for two upcoming films, Ready Player One and A Wrinkle in Time.