Listen to the replay of this week’s show below. You can also hear the show as an audio podcast on iTunes/Apple Podcast, Android, Google Play, Stitcher, and RSS.

Watch the replay of this week’s show below.

Use the timestamps below to fast-forward to our top stories in the replay above.

Earlier this week, social media strategist and IT security specialist Valon Kerolli shared that Facebook appears to be testing the ability to create stories on Creator Studio on desktop. Screenshots were shared by Matt Navarra.

In a post on her public page, Mari Smith added that this update was spotted on “some public Facebook Pages.” However, Facebook hasn’t provided any details or information about its broader availability to all pages.

Twitter Rolls Out Updated Twitter Camera With New Features: Earlier this year, Twitter updated the native Twitter Camera to include colorful caption panels and larger image formats for captured photos. Last week, the company rolled back these changes and added two new camera features: the ability to attach up to four images captured with the camera in an individual tweet and the ability to reply and retweet with photos or videos.

Sometimes it’s better to show than to tell. Now with the in-app camera you can:

So go on and share what’s happening in the moment in just a few taps!

Twitter Experiments With Potential Native Tweet Scheduling Tool: Twitter appears to be testing the ability to schedule tweets on a specific date and time. The Next Web reports that the ability to schedule tweets only seems available to “some folks on Twitter for desktop,” and the company hasn’t confirmed any other details about this potential new feature.

Twitter Tests New Comment Moderation and Conversation Management Controls: Select Twitter users can now limit who can reply to their tweets and join the conversation to “Everyone,” “People you follow,” or “Only people you mention.”  The company officially confirmed that these new settings are only available to a “limited group of people globally on Twitter for iOS, Android, and twitter.com.” However, the tweets will be visible to all Twitter users.

A conversation on Twitter can get noisy and hard to follow. For a more meaningful convo experience, we’re testing something new. 👇

As you compose a new Tweet, you can open replies to everyone, people you follow, or just people you @ mention. For details: https://t.co/ibSKvXJ42q https://t.co/J6dhnwJdxg

In a separate tweet, Twitter announced that expanded threaded conversations are now available to web and iOS users. Following a successful test in its prototype app, twttr, the new layout for replies offers lines and indentations to make it easier for users to understand who they are replying to and how conversations are flowing.

Your conversations are the 💙 of Twitter, so we’re testing ways to make them easier to read and follow.

Some of you on iOS and web will see a new layout for replies with lines and indentations that make it clearer who is talking to whom and to fit more of the convo in one view. pic.twitter.com/sB2y09fG9t

Along with this update, the company moved engagement icons such as likes, retweets, and mentions behind an extra tap to make Twitter conversations more natural to follow without the distraction of these action buttons.

Twitter Tests Warning for Users to “Rethink Replies” Before Tweeting: Twitter is testing a feature that will reduce bullying and harassment on its platform. The experiment is limited to iOS for now and will prompt users to rethink their replies before they hit send on potentially offensive tweets.

When things get heated, you may say things you don’t mean. To let you rethink a reply, we’re running a limited experiment on iOS with a prompt that gives you the option to revise your reply before it’s published if it uses language that could be harmful.

Twitter Previews Design for Audio-Only Tweets: A member of Twitter’s design team, Owen Williams, mocked up what audio tweets might look like and shared it on his personal Twitter profile. As the images show, Twitter’s potential “Hear and Now” audio tweets may look and function like videos in which clips are natively uploaded and attached to tweets.

“Hear and Now” is 😍 pic.twitter.com/xwGSDwOOdu

Instagram Tests Badges on Live Video and IGTV Ads: Instagram is doing “more to support creators” with the introduction of badges in live video, IGTV ads, and updates to shopping.

Badges on live videos, which fans can purchase and use to “show their love” to creators, will be tested next month with a small group of creators and businesses, and eventually expand across the U.S., Brazil, Australia, UK, Germany, France, Italy, Turkey, Spain, and Mexico. People interested in getting early access to badges can submit a form to Instagram. 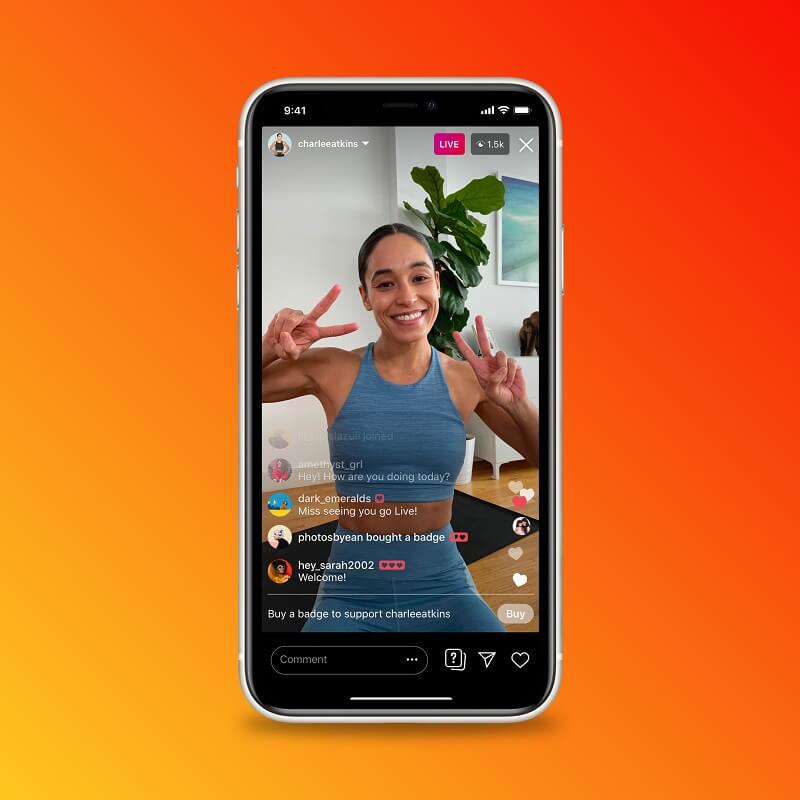 Along with badges, Instagram began testing mobile,15-second ad units for IGTV with a few creators and advertisers in the U.S. and will expand them slowly over time. TechCrunch reports that “at least 55% of the revenue from advertising will go to the creator.”

In addition to badges in Live and IGTV ads, Instagram is also exploring ways to make it easier for creators to generate more shopping and branded content. In parallel with last week’s debut of Live Shopping on Instagram, the platform expanded access to Brand Collabs Manager, which connects creators or influencers with potential brand partners.