“Be yourself.”  It's one of the rules of social media. If you're blogging, tweeting or Facebooking for business, be real—or you won't be followed.

It's tough enough for a small business. What if you're #2 on Business Week‘s best global brands list, with nearly 400,000 employees across 170 countries?

At IBM, it's about losing control.

As it turns out, its decentralized social media approach is another milestone in the company's history—driving unprecedented collaboration and innovation.

IBM lets employees talk—to each other and the public—without intervention. With a culture as diverse and distributed as IBM's, getting employees to collaborate and share makes good business sense.

“We're very much a knowledge-based company. It's really the expertise of the employee that we're hitting on,” Christensen says.

“We don't police. The community's largely self-regulating, and so there hasn't really been a need to have someone go about and circuit these boards and blogs,” Christensen said. “Employees sort of do that themselves… And that's worked wonderfully well.”

An internal wiki serves as a hub of information, drawing well over a million page views every day. Additionally, downloads in the company's user-generated media library now total 11 million.

Run an online search for “IBM blog” and you'll find countless IBMers posting publicly on everything from service-oriented architecture to sales to parenthood. If you want to blog at IBM, you simply start. 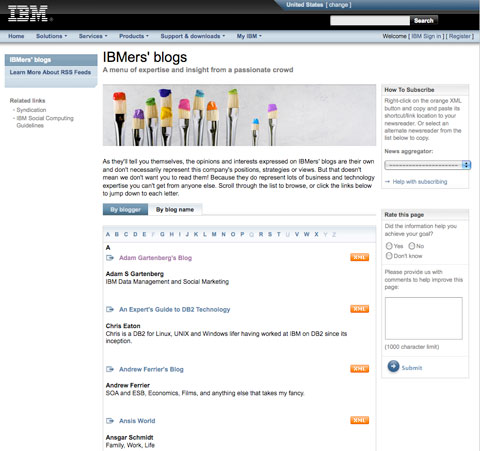 Christensen ties IBM's social media explosion to company “jams.” In 2003, IBM conducted its first jam, not unlike a band jam, bringing employees together in an online forum for three straight days.

“It was a big, online collaborative experiment,” Christensen said. “The first 8 to 10 hours, it was very negative. Over the next 12 hours, the conversation completely changed to being very constructive. By the way, there was no intervention by corporate to say, ‘Hey guys, let's be more constructive.' It was completely employee-led.”

“We realized we could trust employees to engage. Employees realized, ‘if we're within reason, we're going to be trusted'.” 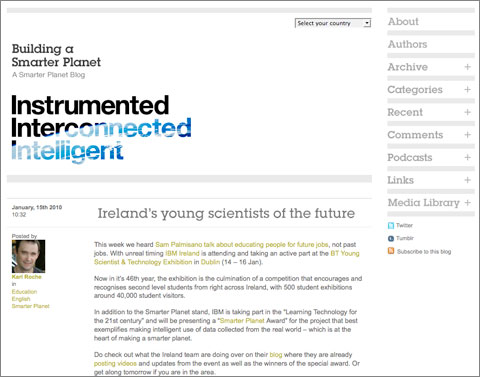 IBM invests in creating its own social media tools. But it's earning that back by monetizing some of those as part of the IBM product portfolio. The other part of the investment equation—employees' time—doesn't seem to be a concern, according to Christensen.

That's because collaboration and knowledge make IBM what it is. And that's a company with $12.3 billion in earnings on more than $100 billion in revenue with a 44.1% gross profit margin in 2008.

Christensen says to date there's not an effort to tag a return on investment to its social media efforts.

“I think if you'd ask any senior executive at IBM, ‘How important is it for our employees to be smarter?‘, inherently they understand that these tools can play in helping with that,” Christensen said. “I don't see myself rarely or ever having that hard conversation on the value of engaging employees in these spaces.”

What do you think about IBM's social media program? What level of control have you found most effective for your company's social media efforts? What are your favorite crowd-sourcing tools?  Leave a comment below.