If you're new to the show, click on the green “Watch replay” button below and sign in or register to watch our latest episode from Friday, April 6, 2018. You can also listen to the show as an audio podcast, found on iTunes/Apple Podcast, Android, Google Play, Stitcher, and RSS.

Facebook Improves and Expands Ad Split Testing Capabilities: Facebook rolled out an update that allows split tests to be created easily in the Quick Creation flow. Previously, Facebook advertisers could only create split tests in Ads Manager's Guided Creation workflow. According to Facebook, this update makes it easier for advertisers who prefer the Quick Creation flow to create and manage ads in bulk to also test ads against one another. Facebook also added split testing support for the engagement marketing objective; added a new reporting dashboard that shows standard KPIs such as CPM, CPC, and CTR for the ads in a split test; and added a way to duplicate a split test while maintaining existing split test settings. (4:30) 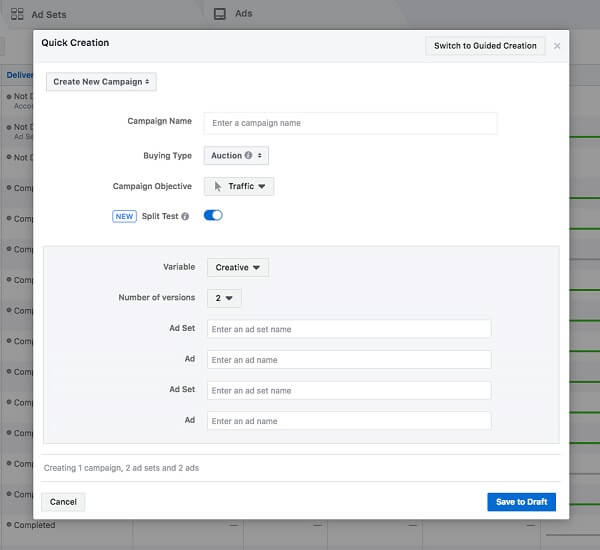 Facebook Cracks Down on Ad Targeting by Email Without Consent: Facebook plans to launch a new custom audiences certification tool that requires marketers to guarantee email addresses and any other data used for ad targeting were properly and rightfully obtained with the user's consent. A spokesperson for Facebook said the platform will require  advertisers and agencies representing them to pledge, “I certify that I have permission to use this data.” Facebook will also prevent sharing custom audience data across business accounts. (14:27)

Facebook Shuts Down Partner Categories for Ad Targeting and Drops Audience Reach Estimates for Custom Ads: The show revisited two topics that were previously covered and discussed them with our guest, Amanda Bond. Last week on the show, we discussed Facebook's plans to shut down Partner Categories, which enables third-party data providers to offer ad targeting data to ad buyers. The company currently allows advertisers to target groups of people based on a mix of data such as offline purchasing activity collected by companies like Experian and Acxiom, user activity and profile data collected by Facebook, and a company's own customer data. It will wind down the practice of using third-party data in its ad targeting “over the next six months.” (21:24)

We also discussed a technical issue with Facebook's reach estimation for custom audiences that could “potentially allow misuse of the functionality.” The company notified brands and advertisers about this potential threat via email and stated it's halting the ability to see reach estimates for all custom audiences across all of its interfaces until this issue can be resolved. Facebook will also limit how many custom audiences an advertiser can create during this time.

Instagram Shuts Down Older Instagram API Platform and Limits Data Available to Developers: At the end of January, Instagram announced it will stop supporting the Instagram API platform over the next 2 years beginning on July 31, 2018. Due to recent updates to Facebook's privacy and data security policies, these capabilities have been shut down effective immediately. Instagram also massively reduced the amount of data and the rate at which developers may pull this data from the Instagram API. The limit rate for Instagram's API platform was previously 5,000 calls per hour. As of last Friday, this was noticeably reduced to 200 calls per hour. (31:32)

Facebook Limits App Developer Access to User Data: This week, Facebook CEO Mark Zuckerberg faced some hard questions on how Facebook is protecting people's information and outlined several initiatives currently launching to prevent abuse, protect personal data and privacy, improve security, and take down fake accounts. As part of these initiatives, Facebook announced that “over the coming months,” it will significantly limit developers' access to data from its Events, Groups, and Pages APIs. (44:40) 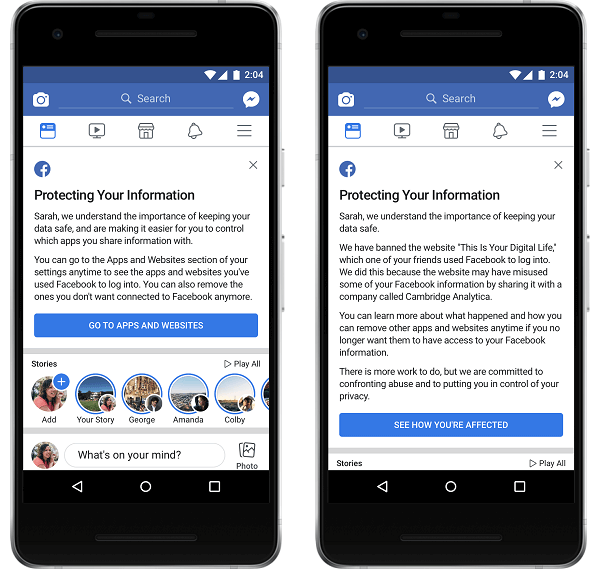 The company is also cracking down on the use of the Facebook login and access to personal details such as a user's political views, religious affiliations, relationship status, and other personal details in apps.

Facebook Rolls Out Bulk App Removal Option: Facebook introduced a new tool that allows users to delete apps and other online services associated with their Facebook accounts in bulk. It also offers the option to delete any posts those apps made to your profile with one click. Previously, the only way to remove apps was to do so one by one. The Next Web reports that this new tool appears to be available in the Settings menu under Apps on both Facebook's mobile and desktop versions. However, Facebook hasn't yet officially confirmed how widely this new feature has been rolled out. (47:21)

Snapchat Introduces Group Video Chat and Rolls Out Tagging to Stories: Snapchat introduced a new group video chat feature that allows up to 16 people to simultaneously conduct a video chat with each other. For larger chats, Snapchat now also offers group voice calls with up to 32 participants. 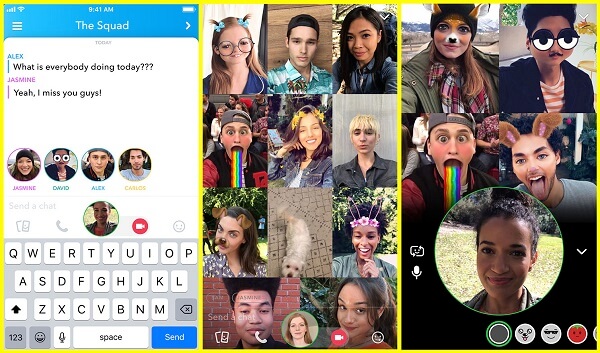 Snapchat also rolled out the ability to mention other people in Stories by simply typing “@” before their username. People who are tagged will be notified when they appear in their friends' stories. TechCrunch reports that Snapchat began testing this feature in March and it's currently rolling out to “users across the globe over the next few weeks.” 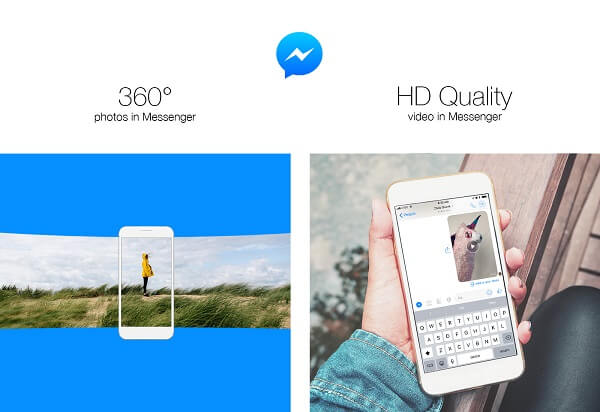 Facebook Shares More Context Around Articles and Publishers Shared in the News Feed: Last October, Facebook began adding more information about select articles and publishers found in the news feed. This week, Facebook rolled out this feature to all users in the U.S. and added two new insights that “give people a quick snapshot of the other recent stories posted by the publisher” and which of your friends has shared a particular article. This tool provides Facebook users with “more context… [to help them] decide for themselves what to read, trust, and share” on Facebook. 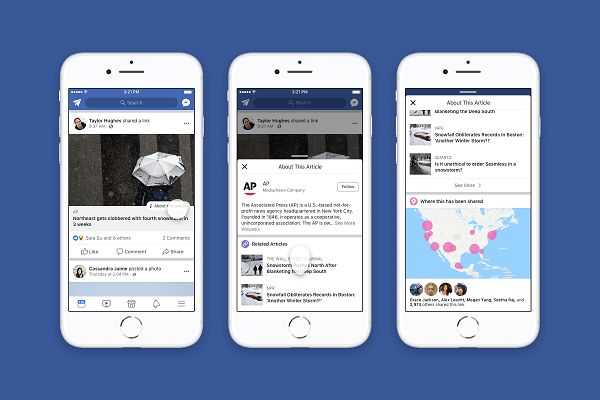 YouTube Expands Advertisers' Options With TrueView Ads: YouTube introduced a new way to buy TrueView ads that are optimized for reach. This new ad format, called TrueView for Reach, gives advertisers the option to build ads from 6 seconds up to 30 seconds long that can be skipped after 5 seconds and will run before or during videos.

Today we're launching Timestamps, a new way to share the best parts of your broadcasts on Periscope and Twitter.

We can't wait to watch what you Timestamp!https://t.co/WCR6hDnmRE

Facebook Adds Two New Animated Text Features and Ability to Disable All Animated Text: Facebook appears to have rolled out two new animated text effects. One activates an intricate “high five” for the abbreviation for best friends forever, BFF. The other releases stars and sparkles when you click the words “best wishes.” Facebook also gave users the ability to control “whether you and your friends see text colors and animation on [your] post.” This option essentially disables all animated text effects, which include other expressions such as congrats, rad, and more. These new features were discovered by Mike Stelzner and Ali Kelly. 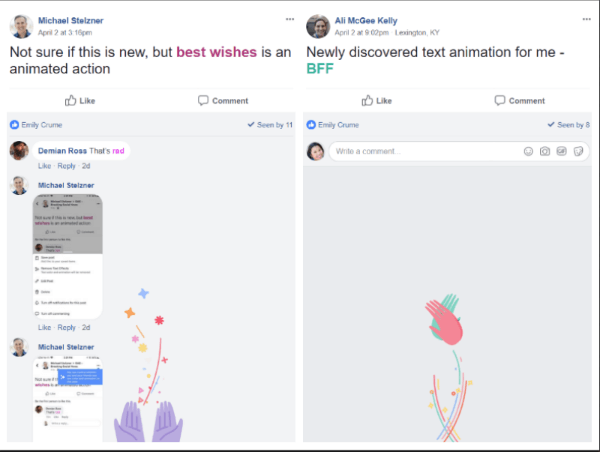 Facebook Updates Page Cover Images With Live Video Broadcasts: When going live from a linked Facebook page, the cover image on the page appears to play the broadcast while it's being recorded. Facebook hasn't provided any details nor officially released information on this possible new feature, which was discovered in the wild by Julie Reily and Jen Cole from Depict Media. 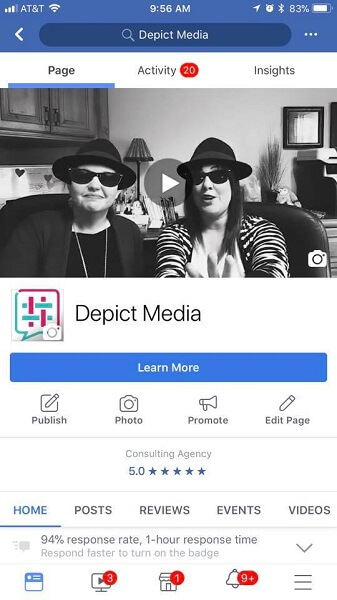