Are you ready for the biggest fundamental change to Facebook advertising in years? Did you know Facebook is making campaign budget optimization (CBO) the default for Facebook ads?

In this article, you'll discover how to use the new CBO setting to create Facebook advertising campaigns and when CBO will become your only option. 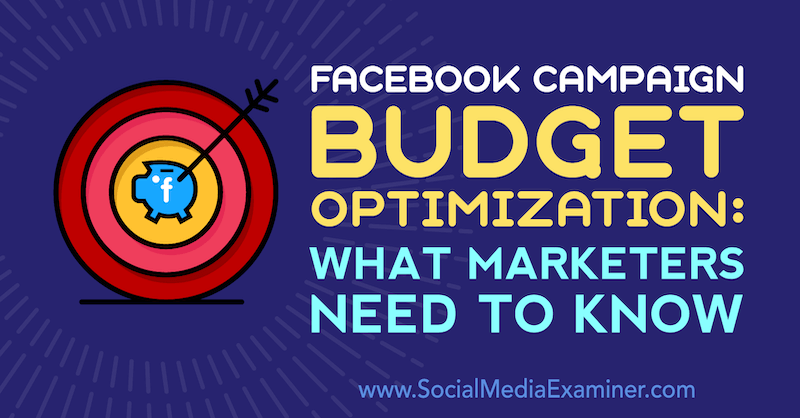 Facebook Campaign Budget Optimization Will Be the Only Option for Advertisers

Facebook recently made an announcement that CBO will be rolled out in September 2019 for advertisers with a 100% CBO adoption. This means that if all of your campaigns in the 56 days prior to the change have been set up using CBO, you won't be able to turn it off and go back to setting budget at the Ad Set level.

In February 2020, the change will be rolled out to remaining advertisers who haven't fully adopted CBO yet.

Pro Tip: Right now, don't use CBO for all of your campaigns. If you do, your account will be locked into using the feature. Continue experimenting with CBO, but keep using ad set budgets until the full release in February 2020. More on why later in the article.

What Is Campaign Budget Optimization?

Campaign budget optimization is a new Facebook feature that optimizes the distribution of your campaign's budget across the ad sets within that campaign. This means Facebook will automatically and continuously find the best active opportunities for results (based on your objective) across your ad sets and distribute your budget in real time to get those results.

It's important to avoid confusing CBO with conversion optimization. The latter is when you use the Conversions objective and Facebook optimizes the ads within your ad set. CBO, however, sets budget at the Campaign level and then optimizes at the Ad Set level to find the most effective ad sets.

In the Facebook graphic below, you can visualize how the CBO feature works. Without it, budget is evenly distributed among the three ad sets, even to the underperforming ones. When using CBO, Facebook allocates more budget to the ad set that's getting the most conversions to produce even better results.

That's why you end up with a higher number of conversions at a lower cost per conversion, which increases your return on ad spend (ROAS). 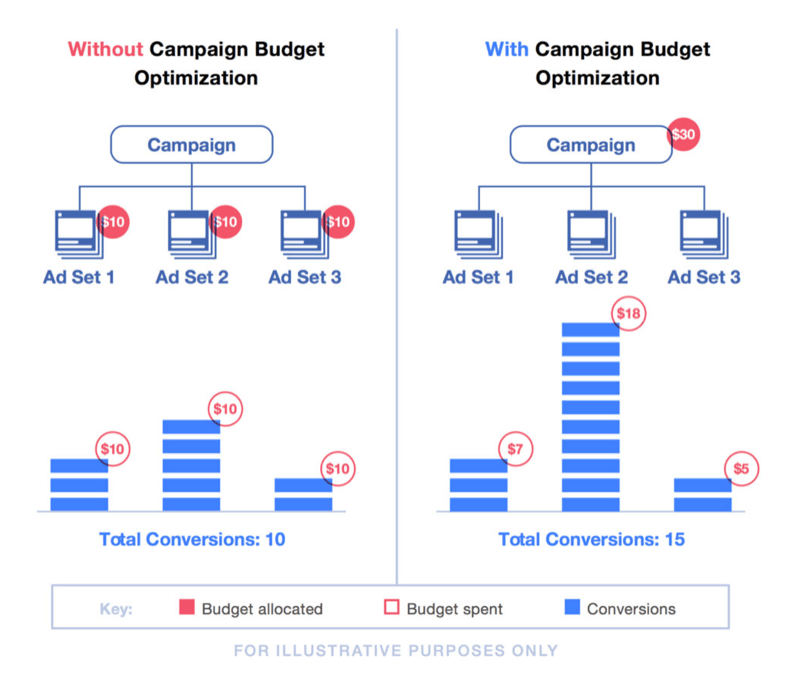 CBO moves where you set your budget from the Ad Set level to the Campaign level, which has massive implications for how you create, test, and analyze your campaigns. You now set a total daily budget to be spent across the ad sets within your campaign.

Using the Ad Set budget allocation feature, you can prevent Facebook from optimizing to the extreme if you want to test audiences. Analyzing results should now be done as an average across the campaign, not in the individual ad sets.

Now let's cover how to use the CBO feature by walking through how to create a campaign.

First, open Facebook Ads Manager, and in the main dashboard, click on Create. This will open one of the two creation windows. The window that opens will depend on how you've previously created campaigns. 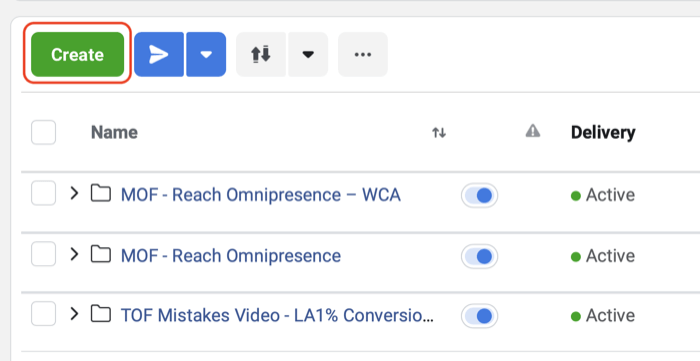 In the Quick Creation window, name your campaign and then select your campaign objective from the drop-down list. For this example, use the Conversions objective.

Now toggle Campaign Budget Optimization on and set your campaign budget. You can set a daily or lifetime budget, just like you would when setting budget at the Ad Set level.

If you want to test three audiences, for instance, and would have previously allocated $50 per day to each ad set, your new campaign budget would be the total ad set budget: 3 x $50 = $150 per day. 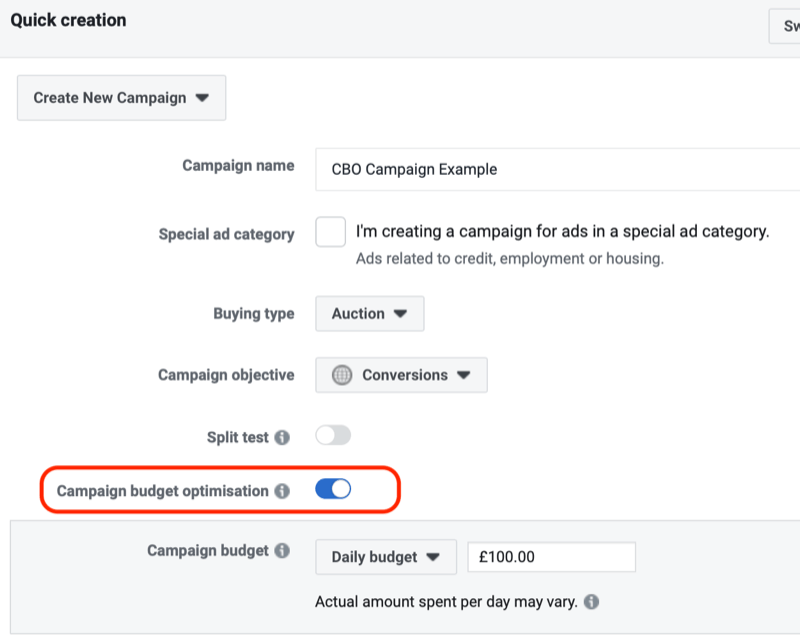 Next, complete the rest of the campaign structure by naming your ad set and ad, and then click on Save Draft to create the draft campaign in your Ads Manager dashboard.

When the campaign settings open in the Campaign Budget Optimization section, you'll now see an option to select your campaign bid strategy. Again, this was previously at the Ad Set level and Facebook has moved it to the Campaign level in this new method of creating a campaign.

With the Conversions objective, you'll have the following bid strategies: 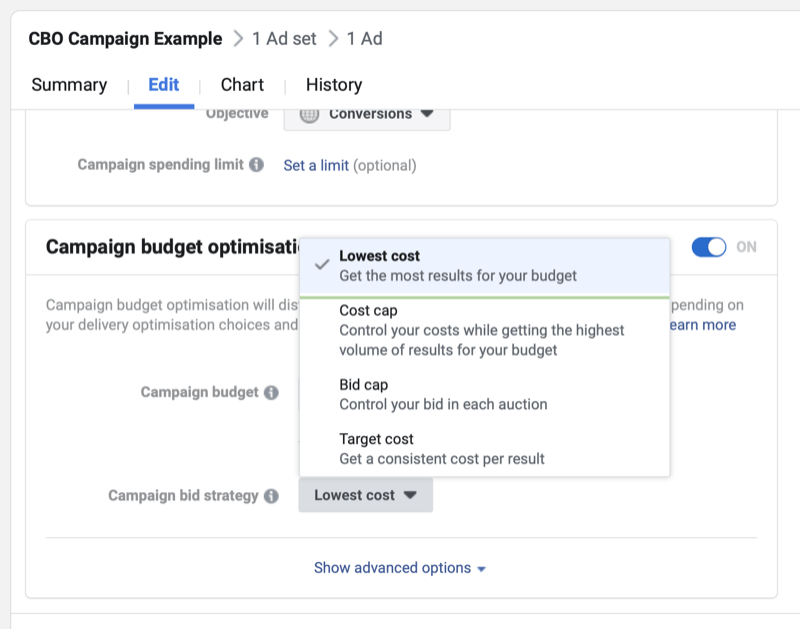 Start with Lowest Cost, which is Facebook's automatic bid strategy. Later, if you want to scale the campaign and increase the budget, you could switch to the Cost Cap or Bid Cap strategy, with more aggressive manual bids.

Now move to the Ad Set level by clicking the Ad Set button on the right side of the screen or clicking on the name of your campaign.

In this example, you want to optimize for leads and you're testing multiple lookalike audiences of different sizes. In the first ad set, you choose a 1% lookalike audience built from a website custom audience of all purchases (customers). 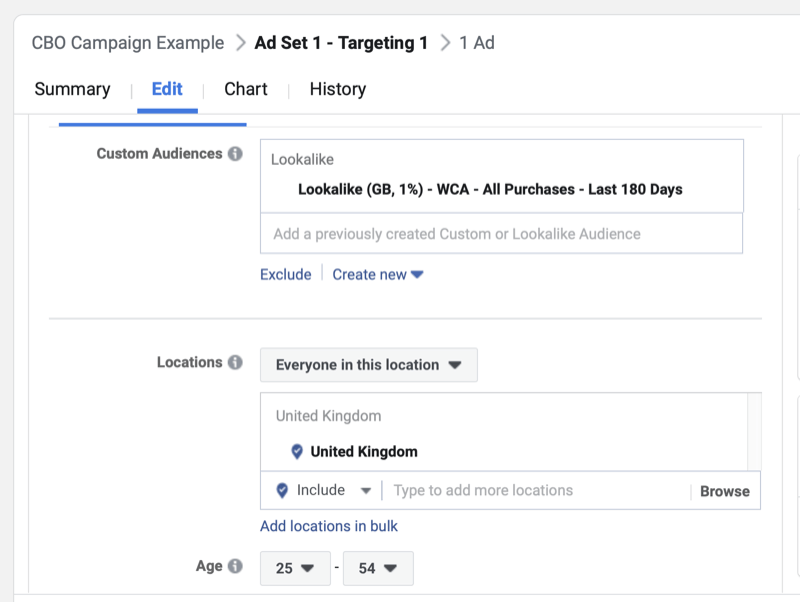 You're opting for automatic placements here because you're using the Conversions objective. For a full breakdown of placements and the optimal times to use each of them, click here.

Now select which action you want to optimize for, such as link clicks or landing page views for Traffic campaigns, or in this case, conversions. Leave everything at their default settings in this section, including the conversion window of 7 Days After Clicking or 1 Day After Viewing. 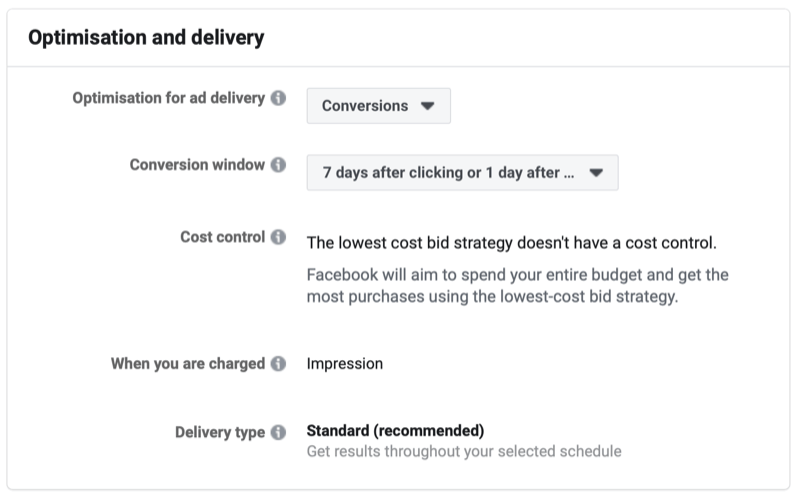 Pro Tip: You can set spend limits per ad set to control the distribution of your campaign budget among the ad sets within your campaign. You'll find this option in the Budget & Schedule section of the ad set.

You can set a minimum spend on the ad set, as well as maximum spend. One of the use cases for the CBO feature is when you want to spread the reach in each of your ad sets more evenly if you're testing audience effectiveness. In this case, you don't want Facebook to optimize quickly to only the winning ad sets. 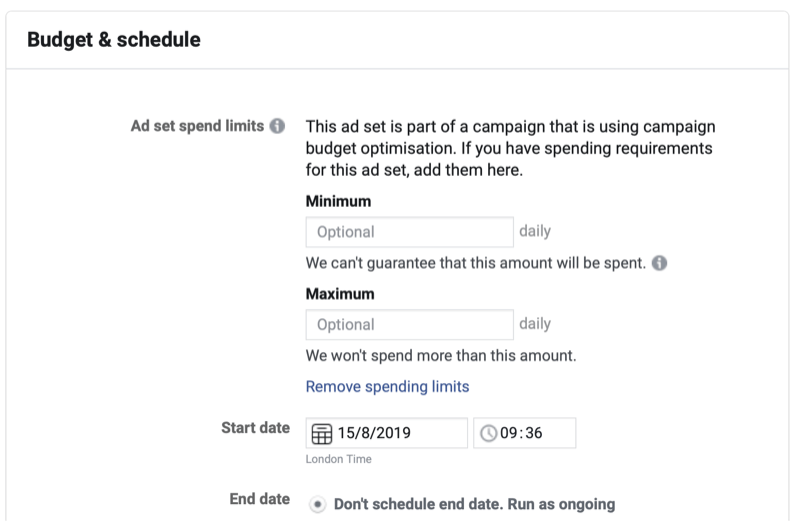 Finally, navigate to the Ad level of your campaign and create your ad. Choose your ad format, creative, copy, link, headline, and call to action. The ad you create will depend on your target audience and what you're selling.

In this case, you're targeting cold lookalike audiences in a cold lead test campaign. The goal is to trigger the hyper-responsive people in your audiences who are ready to buy; therefore, you want to position a service-based ad.

You can create another ad by simply duplicating it using the Duplicate button and changing variables such as the copy or creative.

Counter to this, if you have a low campaign budget with many ad sets and ads, then optimization will take longer because there are more campaign elements that need budget.

Now that you've created your first ad set using the CBO feature, you want to duplicate it to create the other ad sets you want to test. To do this, go back to the Ad Set level of the campaign and with the ad set selected, click on the Duplicate button. 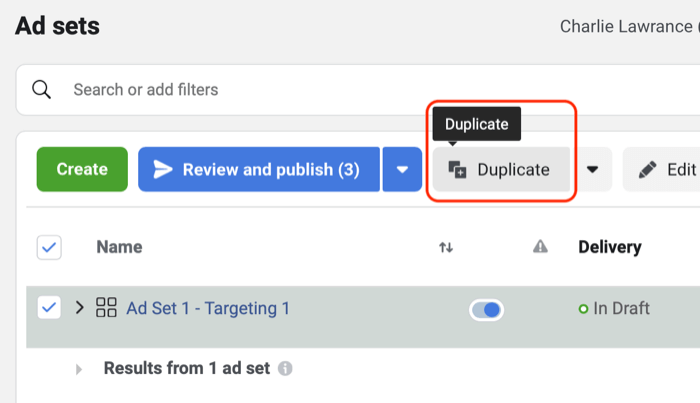 When the new ad set appears, make the relevant change to your audience. In this example, you want to change your lookalike to a larger size, from 1% to 3%.

Keep the rest of your ad set the same so the audience is the only variable that has been changed.

Move on to the Ad level and use the post ID method outlined below to select the ads from the first ad set you created. This allows you to keep your social engagement (such as likes, comments, shares, and video views).

In the Select Post window, choose Ads Posts from the Filter By drop-down list. This will show you the latest ads you've created, along with their post ID, date created, and social engagements. 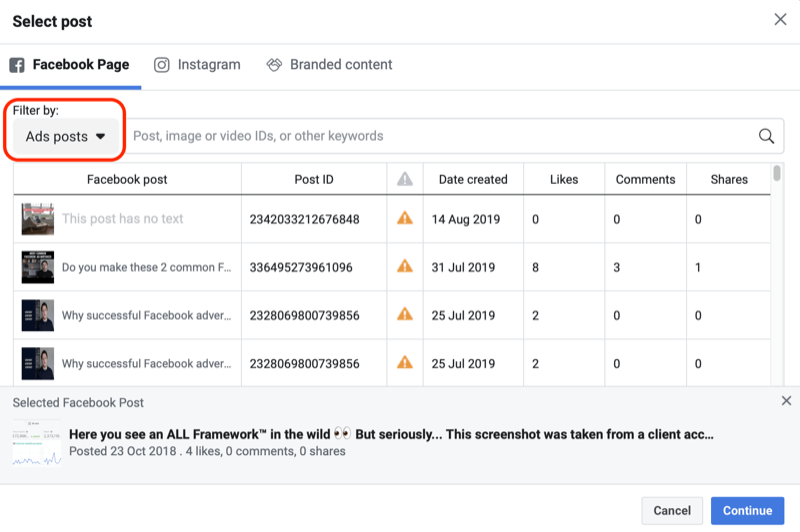 Find the matching ad that you originally created in the first ad set and select it. It will appear at the bottom of the window. Then click Continue.

After you do this, repeat the process for other ads you may have in your ad set.

Pro Tip: If you're creating more than two ad sets, as in this example, repeat the ad set duplication stage outlined earlier, but instead of duplicating the original ad set, duplicate the second ad set you created. You've already implemented the post ID method so you don't have to make any ad changes. Remember, you'll still need to make the relevant audience change in your new ad set.

Once your campaign is created, publish all changes.

To recap, the campaign structure for this example would be: 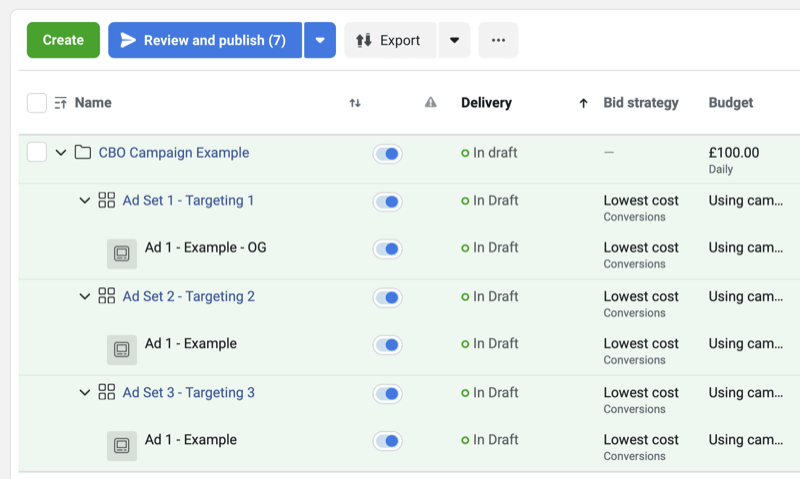 Facebook states that you shouldn't analyze your results at the Ad Set level. Instead, you should measure effectiveness based on the total number of results for your campaign and the average cost per optimization event at the Campaign level.

This is a big change, because previously you'd measure audience effectiveness at the Ad Set level. Facebook suggests reviewing data only at the Campaign level. However, when measuring ROAS, I've found that you can lower your cost per action by turning off the one ad set with significantly higher costs and letting Facebook optimize to the other ad sets that are performing better.

In addition, wait at least a week or longer if you have a smaller budget. Facebook uses machine learning to optimize your campaign results, which takes time. Give it at least a week before making any changes so your results can stabilize once they're out of the learning phase. Don't make changes too often with your ads before the Facebook ad algorithm has a chance to figure it out.

Facebook Campaign Budget Optimization (CBO) is going to be the default and only option to create campaigns on Facebook (beginning in February 2020). This is a big change that will disrupt all advertisers, so now is the time to get ahead and test this feature before the full change is implemented.

What do you think? Have you tried Facebook's Campaign Budget Optimization feature? Do you have experiences to share? Please let us know in the comments below.

Charlie Lawrance is Founder and CEO of Gecko Squared, a digital marketing agency that specializes in Facebook advertising. His clients include eCommerce companies, professional service businesses and best-selling authors.
Other posts by Charlie Lawrance »