When you hear that Facebook is yanking Yahoo from its ranks and inching up on Google's traffic throne, you can't help but pay attention.

Here are 5 studies that show how Facebook is undoubtedly a leading online social contender and a key tool that is continually changing the landscape of online engagement and fan loyalty.

According to recent findings by Nielson Company, Facebook has officially become a favorite pastime for many (but we've known that for a while now!).  However, the findings are pretty astounding when you really break it down:

The average time users spend on Facebook is 7 hours per month (a 10% increase).  To put that into perspective, Yahoo! is in second place, but with only 2 hours 28 minutes per month. The fact that people are spending more than 4 hours extra on Facebook compared to leading sites like Yahoo! and Google is information marketers should note when creating their social media campaigns.

This chart shows the breakdown of user time spent on the major sites: 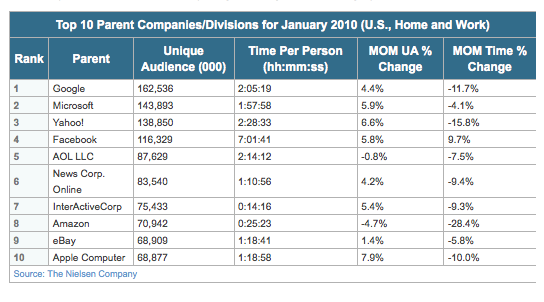 #2: 44% of Social Sharing on the Web Is Driven by Facebook

With the surge of social networking over the past year, we have seen social traffic begin to rival search traffic—and the major players, including Google, are paying close attention to this trend.

TechCrunch recently looked into the services on the web that drive the most sharing and reached out to Gigya for some stats.   What's Gigya?  Gigya is a company that powers sharing widgets on more than 5,000 content sites, including major players like ABC.com and Reuters. As TechCrunch explains, “Consumers can click a share button on these sites and send an article link, photo, or video via a menu of different services including Facebook, Twitter, MySpace, Yahoo Mail, Gmail, and AOL. Over the past 30 days, people have shared almost a million items over the Gigya network.”

Based on Gigya's data, here's the distribution of shared items on the web:

This pie chart, courtesy of TechCrunch, shows the breakdown of social sharing on 4 major sites: 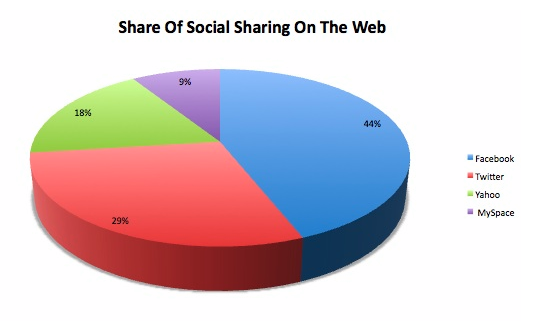 In addition, some other interesting stats from Gigya include:

For share of authentication via news sites, Facebook took 31% while Google was close behind with 30% and Yahoo at 25%.

With entertainment sites, Facebook was the major leader with 52% (Google was second with 17%, Yahoo with 15% and Twitter at 11%).

As we have seen with the popularity of social sites, people like to share links with multiple people at one time, versus just one-on-one via email. Because real results are strongly tied to the amount of online traffic you're able to generate, it's important to break down the sources of this traffic when considering where to spend your time and marketing dollars.  These stats shed light on where the action is really happening.

According to a Compete.com report, there has been a changing of the guard in the online world. Facebook has surpassed Yahoo, now taking its place as the number-two most popular site in the U.S.  Facebook drew nearly 134 million unique visitors in January 2010. According to the site, “It's been two full years since we've seen a shakeup at the top—In February 2008, Google overtook Yahoo as number one and never looked back. Is Facebook's next conquest the Google traffic throne?”

Here's a great chart that shows Facebook's climb to the coveted #2 spot: 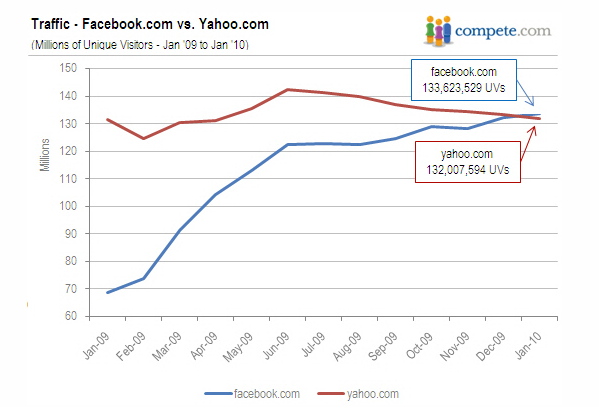 But as we all know, the real dollars are in the engagement—and Compete.com says it best: “Facebook is second to none.” In January, 11.6% of all time spent online was spent on Facebook (compared to 4.25% for Yahoo and 4.1% for Google).  Facebook is in it to win, to say the least!

#4: “Faking It” on Facebook Is Rarer Than Previously Imagined

The findings from a recent research study conducted by the journal Psychological Science, show that instead of “faking it” online, people are much more likely to reveal their true selves online and not the idealized image of who they want to be.

A largely held assumption (supported by analysis) suggests online profiles are less than truthful when looking at true personalities of the users, and the researchers in this study set out to test that hypothesis. “There has been no research on the most fundamental question about OSN (online social networking sites) profiles,” notes the report. “Do they convey accurate impressions of profile owners?”

The conclusion of the report was very surprising to most. The report states, “These results suggest that people are not using their OSN profiles to promote an idealized virtual identity. Instead, OSNs might be an efficient medium for expressing and communicating real personality, which may help explain their popularity.”

The study focused on both MySpace and Facebook; however, the popular site Read Write Web stated that the “real personality” results were more likely to been seen on Facebook than other social sites. They pointed out that because it only allows the use of your legal name and due to its long-standing privacy controls, Facebook “provided its users with a sense of safety, security and comfort—they could be themselves—their real selves, flaws and all, without the world watching.”

The Harvard Business Review recently featured a new study from Utpal Dholakia and Emily Durham of Rice University.  For their study, they asked the question, “How much do businesses really influence consumers when they launch pages on the site to attract ‘fans' and pepper them with messages and offers?”

To gauge the effectiveness of Facebook fan pages, the study used one company's page to measure the effect on customer behavior. For the experiment, the researchers partnered with Dessert Gallery (DG), a popular Houston-based bakery and café chain. They first emailed over 13,000 customers from their mailing list to gather store evaluations and information on shopping behavior. Then they launched the fan page and invited the mailing list to the page.  Over the course of three months, the company “updated its page several times a week with pictures of goodies, news about contests and promotions, links to favorable reviews, and introductions to DG employees.”

Three months after that, they resurveyed the fans and here's the overall result: Facebook changed customer behavior for the better.

Those who had replied to both surveys and had become fans stood out as their best customers. Here's the breakdown of the findings of their new fans:

“We must be cautious in interpreting the study's results,” Dholakia said. “The fact that only about 5% of the firm's 13,000 customers became Facebook fans within three months indicates that Facebook fan pages may work best as niche marketing programs targeted to customers who regularly use Facebook. Social media marketing must be employed judiciously with other types of marketing programs.”

But overall, Dholakia stated that the results indicate that Facebook fan pages offer an effective and low-cost way of social media marketing.

Your insight and opinion matter!  What is your opinion of the “power of Facebook”? Do you agree or are you not seeing the same success rates as these studies suggest?  Do you favor another social media tool over Facebook?  I want to hear your insight, so be sure to share here!